Being a huge Islay fan, I wanted to get my hands on a bottle of Port Ellen to try. The Port Ellen distillery has been shut down for quite some time and finding a bottle of Port Ellen is getting harder and harder every day. According to my Michael Jackson book, the "Adjoining the distillery is a modern maltings, issuing pungent peat smoke lest anyone requires reminding of the island's preoccupation. The malt goes to two other Islay distilleries owned by United Distillers, Lagavulin and Caol Ila." 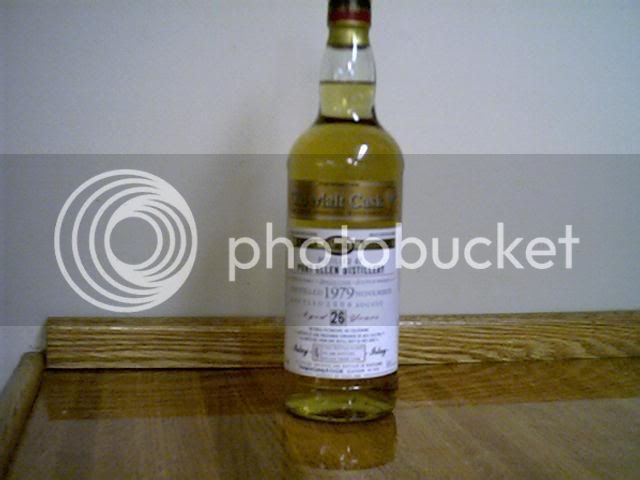 Port Ellen is the town where most people who travel to Islay first land when they arrive by ferry, it's very close to the Lagavulin, Laphroaig and Ardbeg distilleries which are my top three Islays on the south shore.

I was kind of surprised at the light, golden color compared to the other Islays that I've been drinking lately.

Since I'm relatively new to scotch and my sense of smell and taste is neither refined nor experienced, I can't offer what I think is a very descriptive review of this fine scotch. It's a typical Islay but not with the pronounced "iodine" flavor of Laphroaig. I would call it "dry" and "peppery" but not quite as flavorful as the other Islays I've been drinking lately. I found it very smooth and a wonderful addition to my collection.

I did notice more of a kick with this Port Ellen (since it's 50% alcohol) than my other Islays but not enough to warrant an ice cube like the Ardbeg Uigeadial (54% :0 ). I can handle almost anything but not the Uigeadail neat.

While I enjoyed this very much, my Ardbeg "Lord of the Isles" is by far and away my favorite Islay to date.

EDIT: I followed up my second dram (not both in the same night ) of Port Ellen with some Caol Ila 18yo which I normally enjoy very much BUT drinking the Caol Ila AFTER the Port Ellen was a slight disappointment. This was an interesting experience for me because it made me realize just how good the Port Ellen is. :thumbs:

I plan on putting the Port Ellen in my "special occasion" category along with my other fancy Islays so I can make this fine bottle last as long as possible.

For someone who's pretty new to scotch, you've started with some really nice stuff!

khari said:
For someone who's pretty new to scotch, you've started with some really nice stuff!
Click to expand...

We can thank (or blame ) AVB for that.

Now wait a minute, didn't you teach me that scotch was for DRINKING and not just for sitting around?

CRACK IT and review it.

Original Bottling, an official bottling by the distiller.

AVB, would there be any difference in the quality or taste between an OB and one of these independent bottlers?

There will be differences but it is hard to say if it is good or bad. With an OB you get exactly what the distillery wanted you to have, sorta like the Director's cut of a movie. With an independent bottling you get something different that may or may not be as good or better. There is no pat answer for this question.

CoventryCat86 said:
AVB, would there be any difference in the quality or taste between an OB and one of these independent bottlers?
Click to expand...