You’re probably wondering what a cigar herf is… Its roots of the term herf are still uncertain, however the word was coined back in the mid 90′s by members of a cigar newsgroup (before cigar forums).

No one knows exactly how herf originated, however the basic definition of a herf is simply a fancy term for “cigar party” or a way of saying “let’s get together and smoke cigars” or “let’s herf”.  If you spend any time on a cigar forum or even in a cigar lounge, you’re bound to hear the term herf thrown around.  Some might say, “what cigar are you herfing”?

The cigar hobby is very unique, and it definitely attracts a very friendly crowd. But let’s be honest, like any hobby, there are snobs (those who feel smoking a certain type of cigar suddenly elevates their status – ever met a wine snob?). The good news is “snobs” are few and far between! I’ve been herfing for the past 10 years, and I’ve met hundreds of very generous, unique and friendly individuals at many a cigar herf. It’s amazing how a piece of rolled up tobacco can bring people together, and create so much enjoyment and relaxation. Most people I’ve met at cigar herfs are now very good friends of mine. 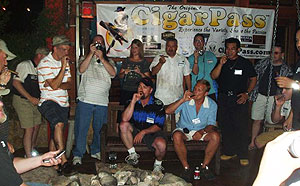 Before I say anything else, I can’t stress enough that you just need to be yourself, smoke what you enjoy, and get out there and herf! Don’t be shy or afraid to participate in a herf. I’ve met many members who were hesitant to attend a herf, however once they did, they were hooked. A couple of main points to remember… be yourself and smoke what you enjoy. This is not a competition nor is it a gathering where people try to show each other up. Everyone is there for one simple reason, to have fun and share the cigar smoking experience with other like-minded folks.

Herfs can occur at any place and at any time. Most of the herfs I attend are typically in the evenings. Unfortunately, Los Angeles is a very anti-smoking region, so finding a good place to herf isn’t always easy. Luckily we have a local hotel which gladly welcomes our group (always support the bar when you can). Usually herfs will take place at a restaurant, hotel, bar, lounge, cigar shop, or even someones house. One thing to mention, if you plan on herfing at a local cigar shop, BUY SOMETHING! It’s never ok to bring your cigars into a shop and start herfing.

It’s not unusual for someone to open their home (backyard) up to fellow members. If someone has decided to host a herf at their home, it’s usually a nice gesture to bring that person a couple of cigars you think they might enjoy.

Get out there and attend a herf in your local area, and I’m sure you’ll have a great time. Just keep in mind, you’re there to have fun, mingle and enjoy our favorite past-time – cigars!

Now that you know what a cigar herf is, get out there and start herfing!