This thread will review:

Name: J&R Ultimate No. 1
Size: 7.00 x 54
Wrapper: Conneticut Broadleaf (CTB) Maduro
Binder: CTB
Filler: HON
MSRP: 25 cigars in a BOX for $137.00
Price Payed: $68.00
Stated Strength: Medium to Full
Comments: This cigar is a little above the price range of low cost but, at auction, it can be had close to $50. J&R claims this to be not only their best cigar but one that surpasses many others double the price. They come in a variety of sizes and wrappers. These cigars were purchased 6 months ago.


To keep it standard, we would rate the cigars in three categories.

A) Appearance--How the cigar looks, how the pre-light smell is, the wrapper, etc.

B) Taste---How is the taste? Spicy, strong, bland, airball, etc. How did the taste progress, etc.

C) Construction---How did the cigar perform in terms of draw, burn, ash, etc.

To rate the cigars we would use a number from 5 to 10, 5 being one you would not even give Fidel to smoke and ten being a damm good cigar. The final rating number would be determined by the following:

A + B + (1.5)C divided by 3.5. This is similar to how Cigar Magazine does it but it is a little different. I realize that this is not perfect and there may be better ways but this would work also. Thanks for the reviews!!

Boss walked in the office around 2:30 p.m. and said, "Since it’s Friday at month end, go ahead and take off at 3." Whoopee! Got home and had a little time on my hands so decided to have at the J&R Ultimate No. 1 for a review. Beautiful afternoon out, so grabbed the supplies and headed for the walnut tree.

A)Appearance: This was one hefty cigar with a dark maduro wrapper full of oils. Some tooth was visible as well as crystalline glimmering when held in the sun. A good weight in the hand suggested good filling and only a slight give when squeezed between the fingers. The wrapper was a bit coarse with veins throughout and a rounded head with decent enough cap. The foot revealed decent bunching with a piece of leaf sticking out. I punched the head with the largest ring on the Swiss Army, and pre-light draw was a sweet raw tobacco. (9)


B)Taste: After giving the foot a little toast, I put fire to it and first draw was quite delicious with an ample richness. Of course dark bakers chocolate with the maduro came through along with wild honey sweetness. There wasn’t a great deal of smoke and took quite long draws to get a decent amount to come out. However, when it did it was a very smooth, almost creamy texture. I’d have to say it was more on the medium side, not quite a full strength smoke. I was thoroughly enjoying it. (9)

A little after the halfway mark, the dark chocolate sweetness subsided and turned more towards dark baked bread. Something close to freshly baked pumpernickel. The strength did build around the last third to a good full smoke, which I rather enjoyed. Quite a nice, long finish as well. It did begin to burn a bit hot towards the end with hints of metallic coming through. With about an inch or so left, I sat it down.

C)Construction: The draw was just a tad bit on the loose side, however was fine for me. Even though there was no resistance in the draw, it was still a bit difficult trying to get a decent amount of smoke out. It had a perfect burn pretty much the entire cigar with a light gray ash throughout. Looking at the ash in the sunlight, I could actually still see the tiny crystals glimmering in it, thought that unusual. It would ash itself about every inch to inch and a half, luckily none landing on me. Although I thought there was a good bit of tooth on the wrapper, not much came through while burning. (9.5)

I have to say this is definitely the best so far. I certainly wouldn’t mind purchasing these at some point. A good cigar with loads of flavor, thank you Saxjazzman for the experience! 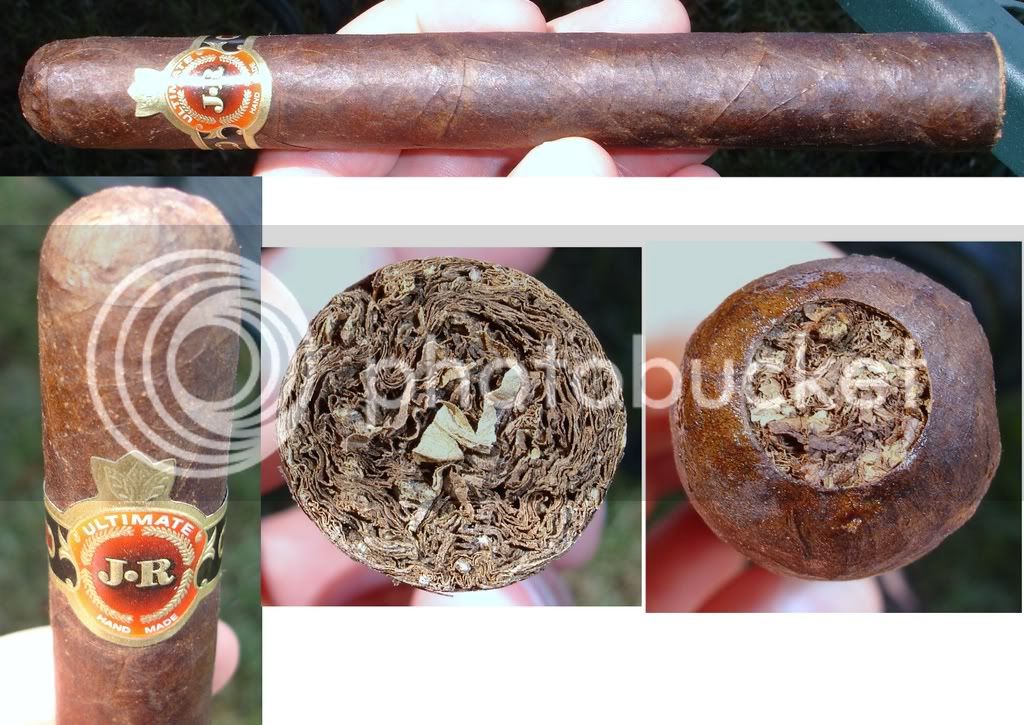 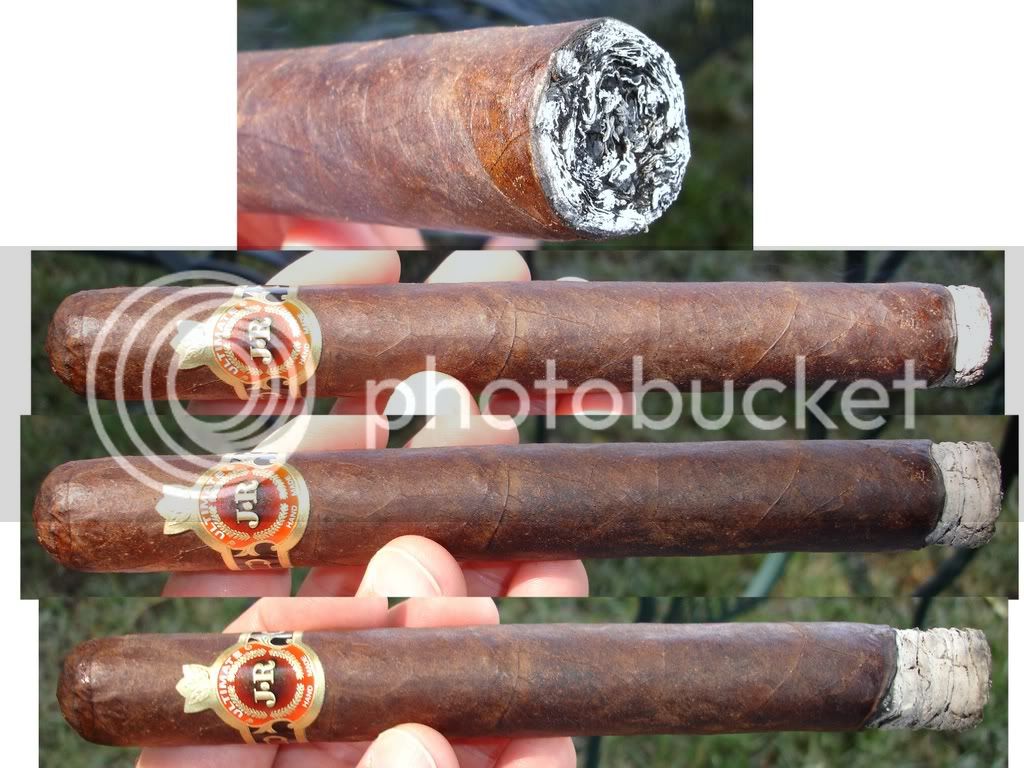 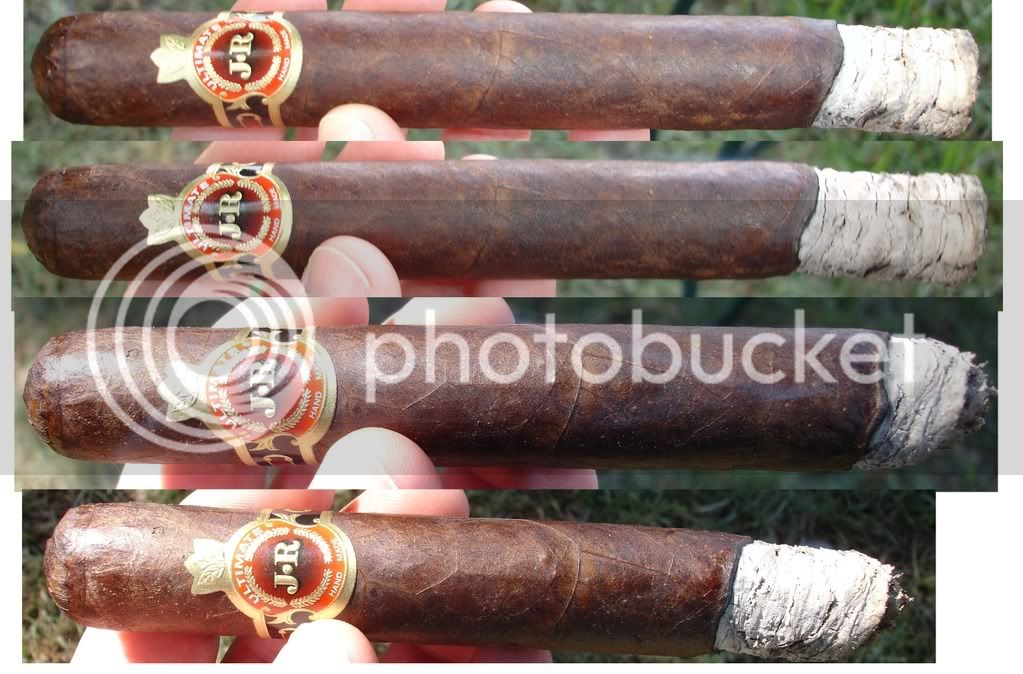 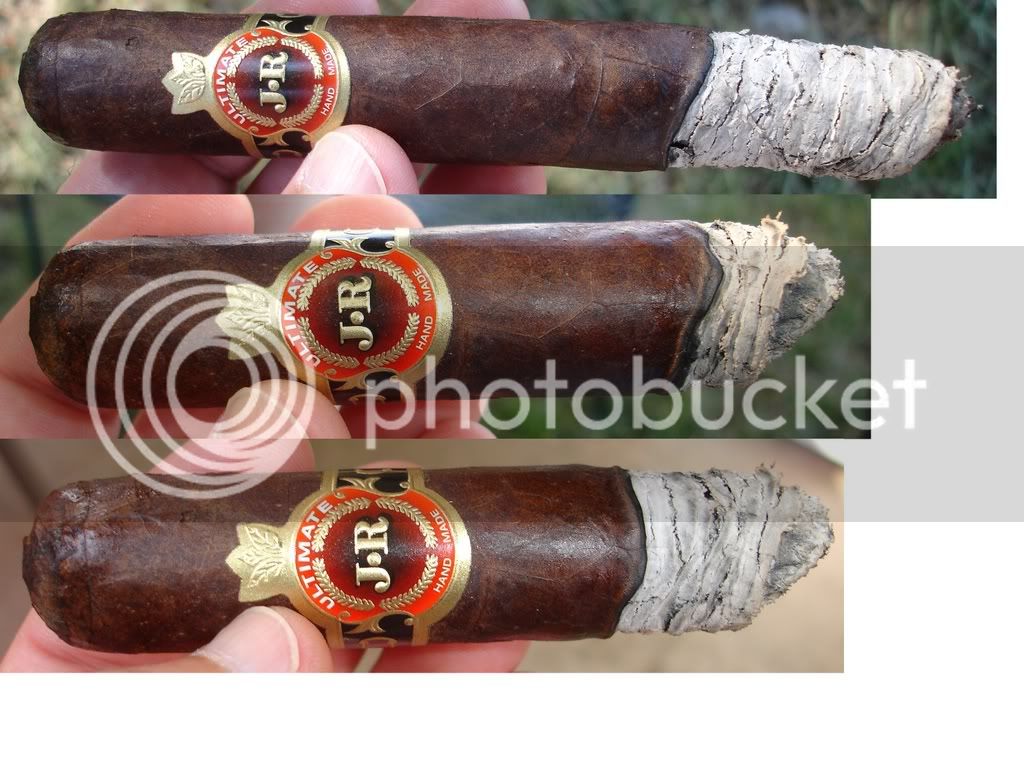 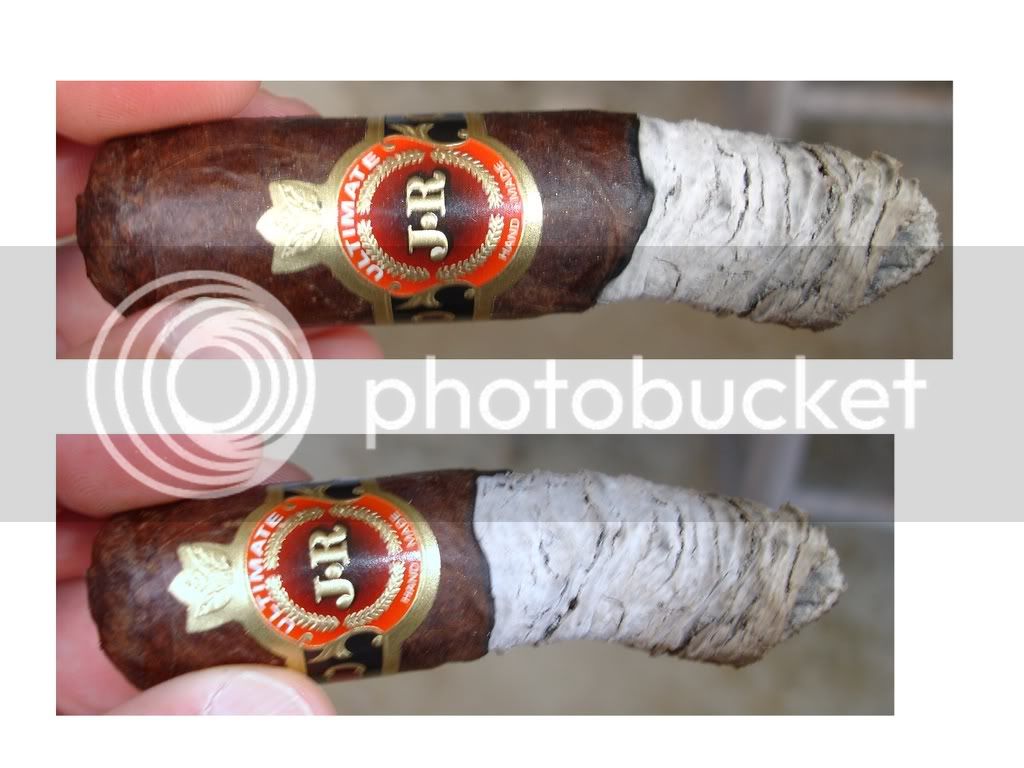 I just got back from vacation and I smoked these while on the beach. (I let the rest of the SJM set to rest in the humidor while gone). I will put up my review tonight but, as a preview, I agree with Kingantz...this is a good stick!

Of the batch sent to me by SJM, I only took these on vacation with me. The reason that I took these was that I had read an article in the mid 90s that ranked the JR Ultimates as 'Superior'. I have tried some of the JR varieties in the past but never found one that I loved and certainly never found one that I would rank as 'Superior'. The setting for smoking these was about ideal: sitting on Edisto Beach with a calm sea breeze while engaging in some serious surf fishing and drinking a decent bourbon...life was good on these two days!

A) Appearance: The first of my two had a small amount of curve in the middle - likely due to my cramming a travel humidor too full. This is a whopper of a cigar which met well with my need for a long smoke on the beach. The wrapper was veined enough to show it was natural but there were no irregular feeling spots. These were firm to the touch and were clearly rolled tight. I particularly liked the fact that the wrapper had enough sheen to show a hint of a fingerprint. The scent was of good fresh tobacco - almost like a pack of Red Man but not as pungent. (9)

B) Taste: The pre-light draw was sweeter than I expected but fit with the initial scent. The maduro taste was present from beginning to end with a smooth mellow sweetness that was calmer than the pre-light draw suggested but still very full of flavor. Both of my sticks put out enough smoke to imitate a forest fire...I must have looked like my head was on fire out there. The smoke was thick and heavy. The taste was excellent but I would agree that this falls more in the medium range and not full. The taste fit very well with the bourbon and I would go so far as to say that the tastes were ideally suited for one another...I would liken the taste to a nice semi-sweet irish coffee. (9)

C) Construction: Even on the beach with a constant sea breeze these sticks lit up with absolutely no problem. The first one lit with a notch that quickly gave way to a mostly even burn. I smoked these down to a little less than two inches and it never got viciously hot...in fact, I would say that through the first half of the smokes, the cigars were almost freakishly cool in temperature. Another element of construction that I liked was the ability of the cigar to stay lit during somewhat long dormant periods (i.e., pulling in a couple of sharks and taking them off the hook). The draw was even and consistently packed with loads of smoke. Even after the dormant times it held its own with the pick-up draw. I have had a few better constructed cigars but not many...these were well made sticks. (9)

This is a very good stick. I cannot give it a 10 in any category but I would not hesitate to light one in any setting any time. I am going to have to look into buying some of these for smoking during rounds of golf...the ability to stay well lit for long dormant periods is very nice attribute and when combined with good taste, this makes a winner for me. This cigar makes me understand why these were rated 'Superior' back in the mid 90s. Thanks for this one SJM, I have one in my sights for purchase now.

Great reviews. When these are running good, they're hard to beat!

I like the Ultimate Naturals but never had the Maddies. Thanks for the review!