This thread will review:

Name: Vigilante / Esteban Carrera(Super Toro)
Size: 6.25 x 58
Wrapper: NIC Corojo Natural
Binder: NIC
Filler: NIC, HON, Peruvian
MSRP: 25 cigars in a BOX for $200.00
Price Payed: $49.99
Stated Strength: Med
Comments: A similar cigar by the same name under a different distributor is advertised as being blended by Rocky Patel. This blend carries no such advertisement. These cigars have recently been purchased.


To keep it standard, we would rate the cigars in three categories.

A) Appearance--How the cigar looks, how the pre-light smell is, the wrapper, etc.

B) Taste---How is the taste? Spicy, strong, bland, airball, etc. How did the taste progress, etc.

C) Construction---How did the cigar perform in terms of draw, burn, ash, etc.

To rate the cigars we would use a number from 5 to 10, 5 being one you would not even give Fidel to smoke and ten being a damm good cigar. The final rating number would be determined by the following:

A + B + (1.5)C divided by 3.5. This is similar to how Cigar Magazine does it but it is a little different. I realize that this is not perfect and there may be better ways but this would work also. Thanks for the reviews!!

I somehow ended up with three of these bad boys in my care, so I figured that it made good sense to try it out first.

Unfortunately, my camera is on the fritz so I can't provide any good pictures of this cigar. The camera heals itself at random intervals, so I may be able to provide pics down the line, but for now, this is the best quality we're going to get, so I'll limit it to one. 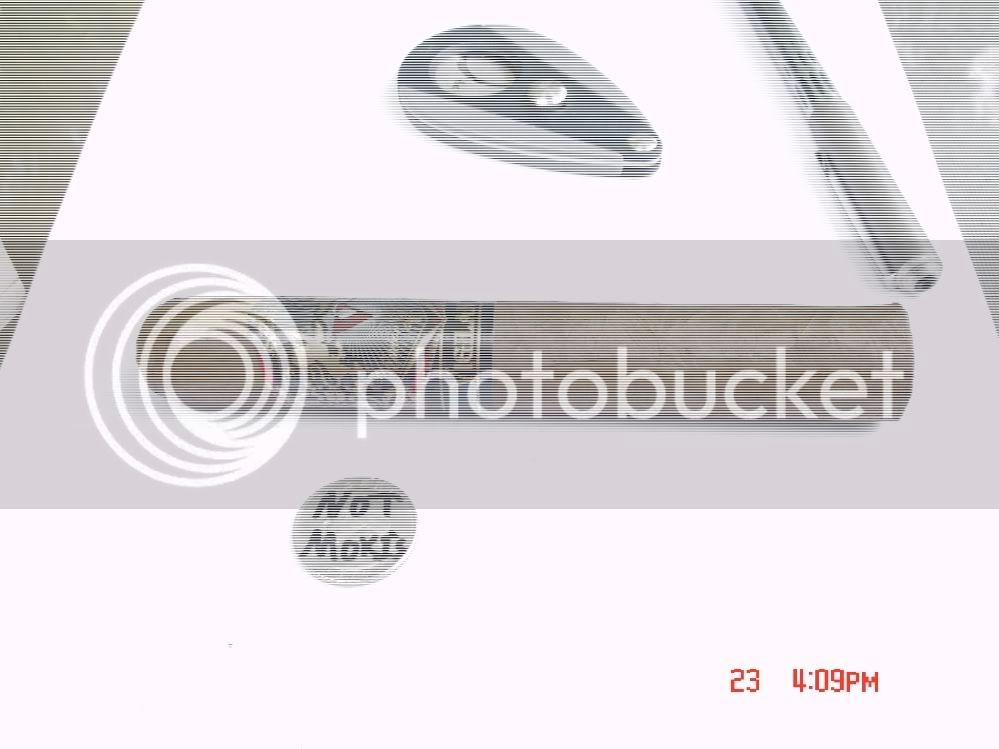 My initial impression was rather hopeful, as my name is Steve and I've always found other Steves to generally be good people, so I expected good things from Esteban Carrera. I sincerely hope that he is of no relation to Joey Porsche.

Appearance: This cigar has a gigantic, conspicuous band with Lowenbrau-like lions and fancy-pants gothic scrollwork, evoking a very serious, foreboding sense of German-ness. The name Vigilante also ups the emotional ante. I expect this cigar to be all business.

It is pretty damn large and imposing. There were a couple small nicks in the foot, a small (2-3 mm) tear in the outermost wrapper, a couple very faint small blue-green spots (don't know if it was mold, it almost looked like a stain of some sort), and a small area where the wrapper looked a little loose. None of these were glaringly obvious flaws. A few veins here and there, nothing gigantic or terrible. There was one much darker leaf rolled into it marbled rye style.

The initial smell reminded me of cinnamon and slightly damp sweatsocks. Prelight draw was clear--not too loose and not too tight. It had a very bitter wrapper, and the draw tasted of dark baker's chocolate.

Taste: It started out very mild with only shades of nuttiness. If I had to name a specific nut, I think I'd go with walnut, but not with any real degree of certainty. After about 1" had burned, I got a quick hint of cherries, roses, and a general floral sense. This was very short lived, although it did have a pleasant lingering aftertaste throughout--akin to the one you get when inhaling after eating black licorice, anise, or drinking chamomile. This mellow aftertaste was the most striking and intense characteristic thus far.

Early into the second third, I had a drinking problem. Some of my water went down the wrong pipe--serves me right for drinking water. This incident may have played a role in the perceived small and gradual increase in intensity. At around the midpoint of the cigar, I began to get a taste not unlike baked apples. It wasn't cloying or overpowering like a Drew Estates or anything, but a more subtle presence. The smoke was very mild in my nose--something I'm pretty sensitive to. After the baked apple-ness subsided, it regressed into just sort of plain, mild, and featureless for a while. It didn't seem as though it was really going anywhere.

Into the last third, as I began to get eaten by mosquitos, it began to taste hot, but even that was somehow very mild. No "spittiness" developed from the heat. Occasional returns to nuttiness and later baked apples. It eventually got a little hotter to the taste and a little spitty, but still quite mild overall--certainly nothing like I expected from the size, label, and name. Rather than a Super Toro named The Vigilante, it had more of the character you'd expect out of a Petit Corona named The Accountant.

All in all, the taste wasn't bad or anything, there just wasn't much to it. I kept expecting for it to build or to do something, but other than occasionally reminding me of the only reason I'll happily agree to eat at Cracker Barrel (the fried apples), it just never really took off or developed at all. It was quite mild, an impression that may have been accentuated by my entirely opposite expectations.

Construction: It got off to a quick burn at the start, likely due to the few cracks at the foot. It burned a bit unevenly to start. It felt like it was really burning hot--the band was warm to the touch before I had even smoked 1". Stop and go runners continued on until just before the 1/3 mark at which point they all self regulated and it burned evenly for the remainder. The first third's ash was quite mottled and haphazard looking, but gave a good deal of resistance when I went to knock it off.

After ashing away the first third, it seemed to nearly go out as I purged it. I gave it a little TLC and it was back on track with a rather pointy central ash cone. I put off removing the bands for as long as possible (which wasn't that long, given how enormous they are) since there was already a few signs that the outermost wrapper was a bit fragile, and the fact that the bands seemed to have had a pretty liberal application of adhesive, so I didn't want any tearing to occur.

Towards the end of the middle third, the draw tightened up a tiny bit, but not horribly so. The ash also tightened up into less of a mess than the first third.

The last third was unremarkable. I was starting to get eaten by mosquitos, there was a thunderstorm rolling in, and I wanted to get the dogs walked before it started pouring, so I put it down a little earlier than I otherwise would have--I'd say that there was at least 30 minutes left in it (not counting any nubbing possibilities), but unless it really had a trick up its sleeve, I don't expect that it really would have changed a whole heck of a lot in that last inch and three-quarters. I will make sure to take at least one future Vigilante down to its natural conclusion just in case something exciting was about to happen right after I put it down.

Total burn time was a shade over an hour, but I'd put it right around an hour and a half unless you choose to nub it.

All in all, if you're after a gigantic mild cigar, this one's for you. It might be good to have a few on hand for non-smokers, or for novices who might enjoy feeling like a real macho man with a giant stogie to chomp on and wave around but who in reality couldn't handle the punch of a more medium or full-bodied stick. At $2 apiece, you can hardly go wrong, but if faced with the MSRP of $8, you're probably better off looking elsewhere.

This seems about right. Just a tad below average. I certainly wouldn't disagree with anyone else who rated it lower due to its deceptive mildness and relative lack of complexity, nor would I disagree with someone who liked it a little more because of its mildness and simplicity. It's a stick with a pretty narrow audience, but I'm sure there are people out there for whom this stick is just perfect.

You can observe a lot by just watching

Sounds like a pretty good deal at $2 a stick. Great review, BTW!

A) Appearance: This was a thick cigar with very nice looking presentation of double bands. It seemed to be filled very well with a decent weight in the hand and a bit of sponginess when squeezed. The wrapper was a nice oily colorado, slightly sticky to the touch and fairly smooth with one prominent vein down one side. The foot showed decent enough bunching and a fairly rough cap on top. (Score - 8)

B) Taste: Head punched, pre-light draw was quite loose and didn’t provide much in taste. Once lit, first draw revealed a somewhat weak richness with a mild strength. I picked up flavors of toasted bread with floral hints on the palate. Somewhere in there I was picking up…fresh dirt. Was quite a smooth smoke. No spice to speak of. On in, the strength picked up slightly, and the flavors remained basically one-dimensional with the same toast/dirt flavors. After the halfway point, I started getting a somewhat chemical taste, like a burnt match? I was finding it a bit difficult picking up flavors as it began to burn a bit hot, getting somewhat bitter. I put it down with a couple of inches left. (Score – 7)

C) Construction: As previously mentioned, the draw was quite loose and became even more loose when the cigar started warming up. It did have an almost perfect burn with dark gray ash. About a quarter in a spot appeared, and I thought it may run, however it corrected quickly and remained perfect. The ash held on for about an inch and a half before it dropped. Right at the end the wrapper seemed to want to come a bit loose, but otherwise did well. (Score – 7.5)

Overall - Not a terrible smoke, however not one I would purchase myself. It needed a little more strength/spice for my taste. 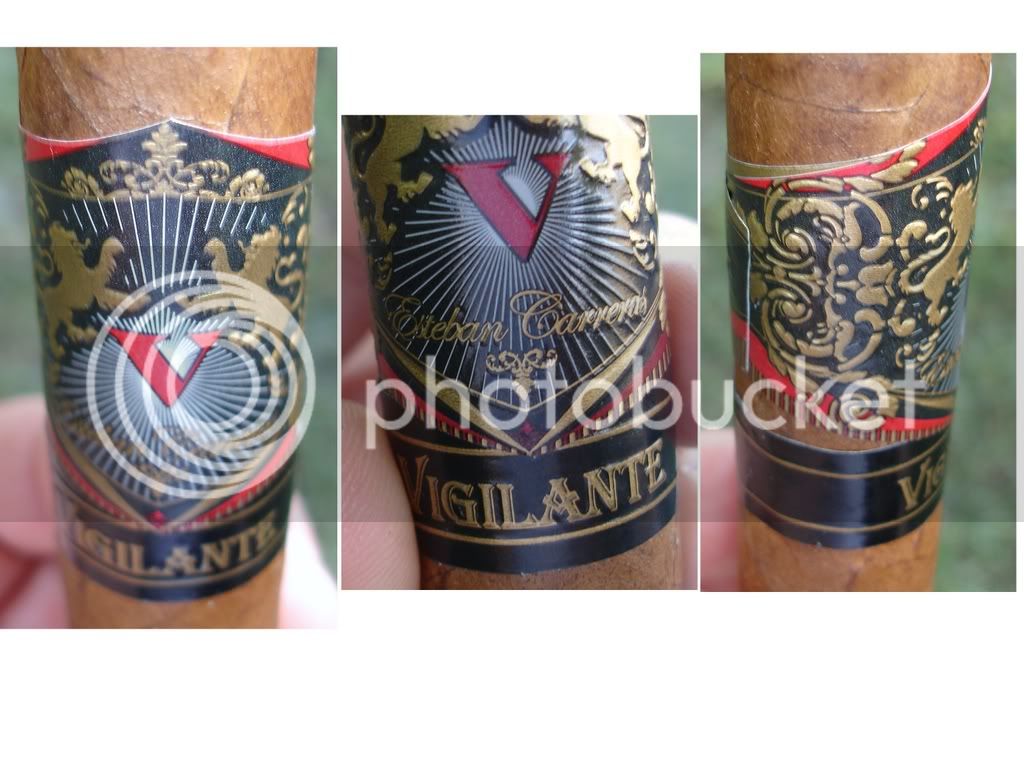 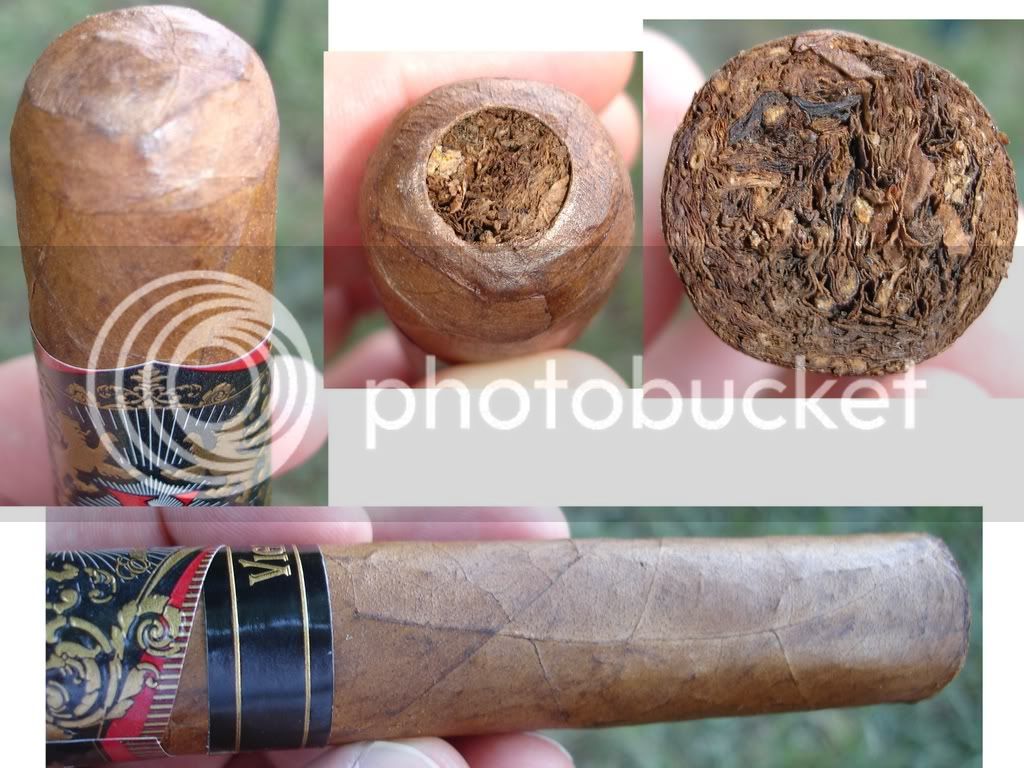 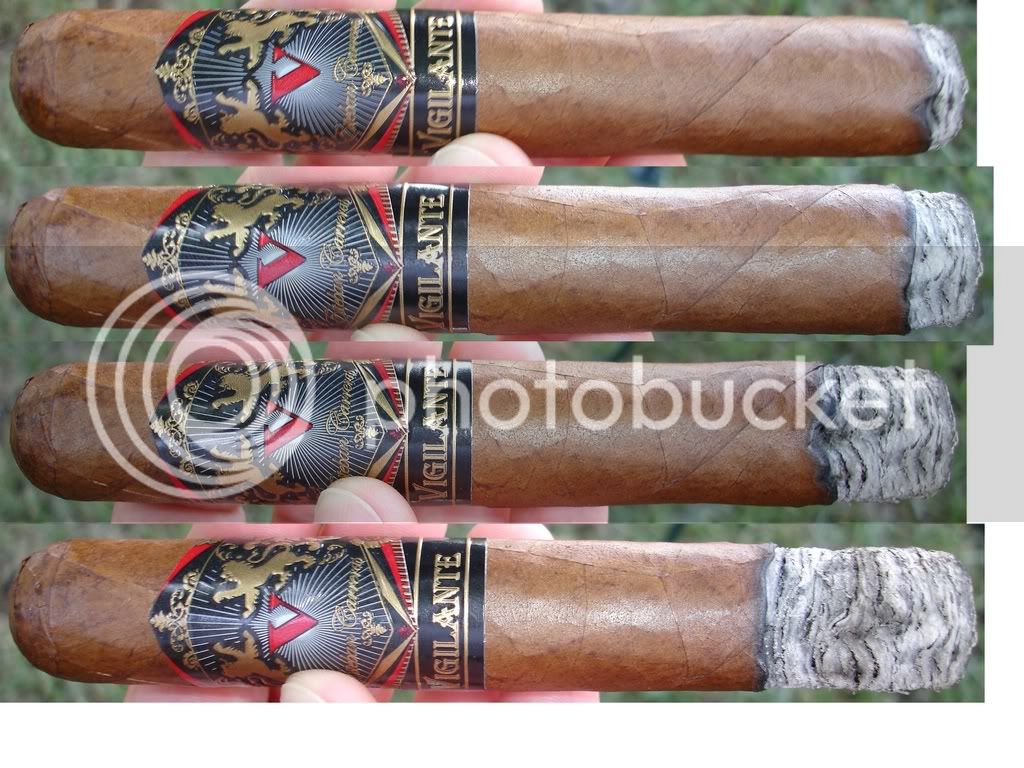 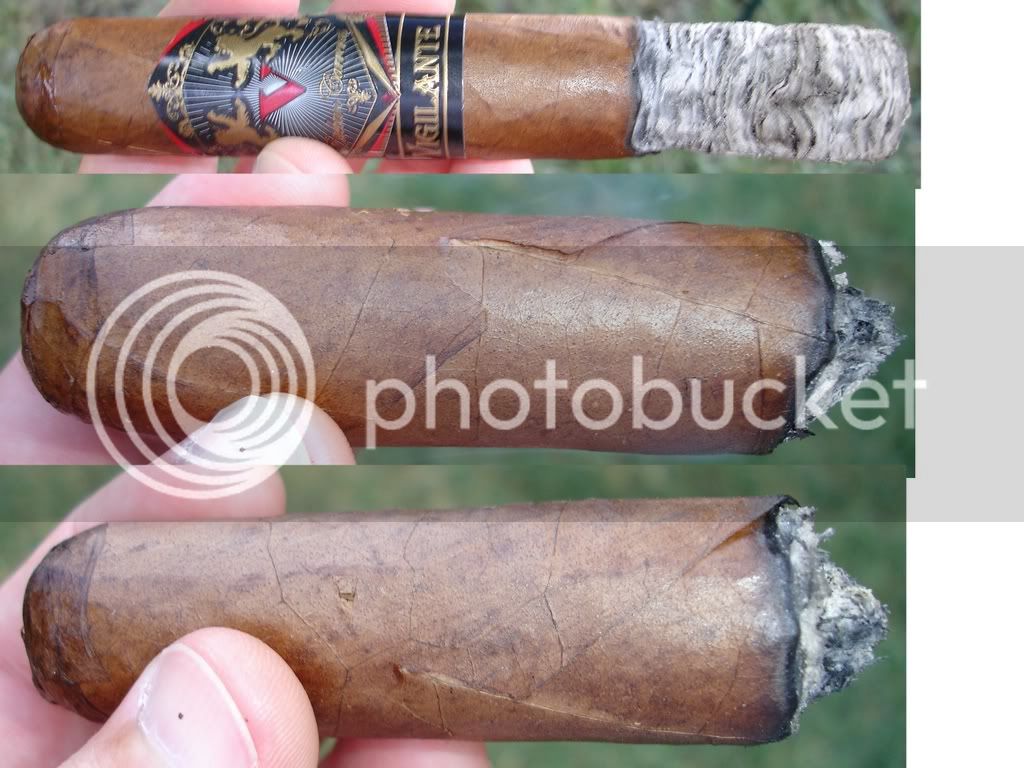 OK, I just smoked out the second of these sticks and I am ready to give it a shot:

Appearance: You have to hand it to these guys for trying to put together a nice looking cigar. The size is imposing, the color is dark and deep and the label is as ornate as anything being put out by Alec Bradley right now. The first one was pretty much perfect in appearance with no real problems in the wrapper but the second had a crooked cap and a decent sized split at the foot. I would have to say that the appearance was slightly above average but this could have been better if the second cigar looked like it was made by a professional. (7.7)

Frankly, while I prefer a more consistent taste from a cigar, there is something fun about gambling on good or bad taste with every progressive draw. I cannot give marks above average though because this one needs some work in the blend. My guess is that some time resting in the humidor would even out the taste but I doubt what is in there is good enough to justify the wait. (7.0)

Construction: The draw on these is, at best, loose. It belts out the smoke - loads of it but soon after the half way point there was some serious heat coming from the stick - again, too loose to be considered good. The ash did not hold well and the burn, while not terribly uneven was not smooth. Of all the aspects of this one, construction is the worst. (6.5)

Overall: Age might help it and $2 per stick is pretty good. That being said, I would not purchase them to hold for the wait because the construction problems are just too much of a concern. That loose draw and hot burn was bad enough to scare me away.