BlindedByScience said:
Any of you guys that are 'holding' that are willing to part with a couple, let me know. I'm sure something can be worked out......
Click to expand...

I have you covered on this.

tone-ny said:
I have you covered on this.
Click to expand...

Interesting article by one of my favorite reviewers...

Cuba’s Habanos Añejados Program Up In Smoke: No Evolution And No Complexity
by Ken Gargett

The last decade has been the most tumultuous for the Cuban cigar industry since the Revolution. There will always be the occasional “I miss the good old days” from old timers, but overall there has never been a more exciting time for cigar lovers.


The Limited Edition (Edición Limitada) program that commenced at the turn of the century has been, by and large with a few notable exceptions, a roaring success. The Regional Release program has also been well received.


So, too, have what is commonly called the Book Series and the various other small special releases. The Gran Reserva program has resulted in some stellar cigars, and the Antique and Commemorative Humidors have also been highly sought after.


There has been considerable disappointment for some who have seen their favorite regular cigars discontinued, while new additions have brought new fans. Others bemoan the trend to fatter ring gauges, but this style is currently preferred by a majority of cigar smokers (personally, I think it a shame, but I am not on the side of the masses with this one).


There is some criticism that Habanos, the Cuban state tobacco company encompassing 27 brands, has become far too focused on the various programs and neglected the regular release standards, but as so many of those regulars are smoking superbly, that seems a little ill-considered.


Perhaps it would be more accurate to say that Habanos has become more and more focused on high-priced cigars at the expense of the standards. Prices are driving some cigar lovers to look at what is available elsewhere. To counter that, Habanos can point to the fact that many of the special editions sell out quickly and remain in demand for years.


If there was one series that has not lived up to the expectations of many, though, it is the Aged Habanos Series called Habanos Añejados.

While some cigars benefit more than others from aging, in general most good Cubans smoke to advantage if they have some extra years under their belts (or bands). The aging with this program takes place after the cigars are rolled as opposed to the Limited Edition system, which ages the tobacco leaves before rolling.


The Series commenced in 2014 with one or two releases each year. Each release consists of a cigar that has been aged for five to eight years, with each cigar having an extra identifying band. First up were the Romeo & Julieta Pirámides Añejados and the Montecristo Churchills Añejados, though in typical Cuban fashion both 2014 releases did not arrive until the following year. 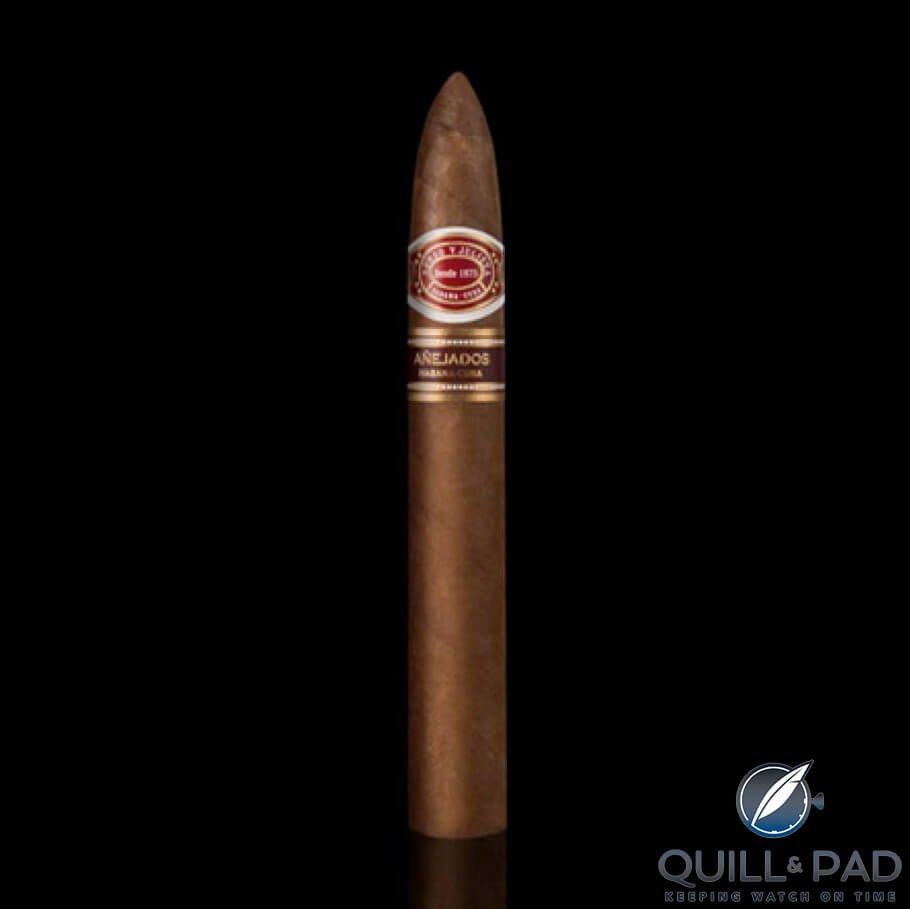 Next cabs off the rank were the Hoyo de Monterrey Hermosos No. 4 Añejados and the Partagás Corona Gorda Añejados. The 2016 release was the H. Upmann Robustos Añejados, though these did not hit the market until the end of 2017 so they are currently available.


All of the releases in this program have their fans, but generally the response has been underwhelming. Opinions have varied, as they always do, and there have been suggestions from certain European countries that anyone not seeing the subtleties simply could not appreciate a fine cigar. Something about the emperor’s new clothes springs to mind.


The Romeo & Julieta Pirámides Añejados was fair – some wood and nutty notes but nothing that screams that this is a special cigar and worth considerably more than standard releases. Quoting of prices can be very misleading as national taxes vary enormously, meaning that some markets enjoy far better value than others.


I have not seen the Montecristo Churchills Añejados. which supposedly had eight years aging before release. Those who have speak of cedar and coffee, but no one gets terribly excited.


The next pair were the Hoyo de Monterrey Hermosos No. 4 Añejados and the Partagás Corona Gorda Añejados. The Partagás is, for me – and I think most cigar lovers – the pick of the Añejados program.


That said, it, like all of the cigars in the program, is not obviously exhibiting the DNA of the marca. Some spice and pepper here, some attractive flavors and balance there, but nothing to suggest that it is worth the extra money in comparison with a number of the Partagás standard releases.


The Hoyo, on the other hand, was a serious disappointment. Put simply, if you are paying well over the odds, you expect far more than you get from regular Hoyo cigars. And it is not happening.


The charitable view is that it offers some aged characters and smoothness, though far less complexity than one would expect. The more brutal view is that it is a bland wind tunnel, waiting for something to happen and utterly lacking in any complexity. An epic fail.


Which brings us to the latest release, the H. Upmann Robustos Añejados. We are told they have been aged for between five and eight years in their original boxes of 25 (it seems curious that they cannot be more specific).


Like pretty much all of the Añejados releases, the size is not part of the usual Upmann range. Some are released as various special offerings, such as the H. Upmann Robustos Limited Edition 2012, but there is not a standard Upmann Robusto. And this has led to all manner of negative speculation.


The cigar looks good – they all do with a hint of appealing red rust in the wrapper. It seemed, on opening, that this might be the one where the program turns the corner. It had a slight pepper note and a quite distinct red chili powder dusting.


A little curious, but interesting and enjoyable. Sadly, it did not last. After that initial burst of hope it was more of the same. Quite how they can make cigars so bland, beggars belief.

One can argue, as I would, that there is nothing really wrong with most of these releases. They are simply all a bit underwhelming, bland. There is no evolution and no complexity.


Such a shame as the idea is an excellent one. Quite frankly, there is absolutely no compelling reason to seek out these cigars in preference to those from the Limited Edition and Regional Release programs – programs of which Habanos can be justifiably proudif special releases are your thing – or simply the standard releases from these marcas.


Part of the problem is that this seems to be a program without any real direction in contrast to the Limited Editions and other special releases.


Some have queried whether they really are aged cigars – I would say that they most certainly are. Not necessarily exciting or well aged, but aged nonetheless.


The problems seem to stem from the fact that there are endless rumours that these are simply leftover cigars from other programs repackaged and released under the Añejados bands. Until I see definitive evidence of this, I think that Habanos needs the benefit of the doubt.


My issue is that they are simply unexciting and that makes them seriously overpriced. There is so much better on offer in the world of Cuban cigars.

I've had a chance to try 3 of the 4 (HdM, Monte, Party), and the only one that came close to blowing me away was the Partagas. But I'm also a huge Partagas fan, so take that opinion with a grain of salt. I considered going in on a box split of these, but honestly the price hasn't ever been low enough to really tempt me. They're better than good, but not priced in such a way that I'd be tempted into a box purchase.

I'd be interested to know how they are if you try any of them!

I recently tried the Montecristo and found it to be very one dimensional. Not what I was expecting for an aged cigar/tobacco. The Partagas are still my favorite and have smoked quite a few. I'll have to revisit the Monte in the summer and see if it was just that one cigar. I also want to try the H. Upmann version, but don't want to invest in a box to do so. I agree with Bill on the aging process, rather do it myself for cigars that I enjoy.

Just smoked the Partagas. It was really good, maybe even great, but for the hype and price I'm scratching my head a bit. Two more to try; they're interesting, but I'm not close to being blown away and putting three boxes in my cabinet....as I have with other smokes......

BlindedByScience said:
Just smoked the Partagas. It was really good, maybe even great, but for the hype and price I'm scratching my head a bit. Two more to try; they're interesting, but I'm not close to being blown away and putting three boxes in my cabinet....as I have with other smokes......
Click to expand...

I tend to be a little on the enthusiastic side and less-so on the experienced side compared to yourself and others around here, so take my "blown away" with a heaping grain of salt. I think "great" is the word. The party was better than good, but not much more. And agreed fully that -- dollars to doughnuts --- they still aren't worth the price point.

Loved this thread and the linked/posted articles.
I just recently acquired some RyJ Anejados so I will have a tasting and report back as well. I dont know what this says about me, but I'm pretty easy to please so I bet I will love them!

Ok. Smoked one of these Anejados last night. It was my second smoke of the night so I was kind of looking for a lighter and smooth creamy smoke. This was a perfect smoke for me and I enjoyed it for that aforementioned reason.

Now, I will have to agree that it was not complex, and did not evolve during each draw ie...the initial taste was the finishing taste with each draw. Smooth and simple but not complex.
There cigar produced alot of nice blue smoke and the flavor was good. Draw was excellent!

It was a light and earthy-leathery, hints of toasted almond cocoa. Consistent throughout the length of the stick. It is a quality smoke, just not complex. I enjoyed it. The construction is top notch and the draw super nice. I point this out b/c my early smoke of the night was complex but I had to work harder on the draw, so this anejado was a welcomed pleasure with the ease of its smokability.