The past few weeks have really been tough with having some serious health issues going on for the whole family. It started out with my baby girl coming down with strep, the wife next, then me, and on top of it having one of the worst pollen seasons I’ve ever seen, which certainly hasn’t helped. I’ve not been able to smoke or drink pretty much the entire time, which has been difficult to say the least, however the past few days there’s been a lot of improvement, and today I’m actually feeling quite decent. Decent enough in fact to come out under the walnut tree and put fire to a H. Upmann Sir Winston.

I received this cigar some time back from Jimmy (Jimmyhaze) who I haven’t heard from in a while now, hope he’s doing well. I believe this is a 2008, however not 100% sure on that. One thing I find unusual is that compared to other Sir Winnies I have, the wrapper on this one is a slight shade darker, however I don’t believe it has any bearing on the authenticity. It has a slight oiliness to it with a couple of prominent veins running the length, and no hard or soft spots to be found when squeezing it. After punching the cap, I find the draw to be absolutely perfect with a somewhat sweet straightforward tobacco taste.

There’s a strong breeze blowing, which makes it a bit difficult while trying to light the foot. After getting it lit and the fire burning well, I take a few puffs and then a long draw to get a very nice peppery spice on the back of the tongue and throat. The smoke is medium in strength and quite smooth with a buttery texture over the tongue. Flavors are somewhat rich with a toasted bread and nut taste, slightly sweet on the palate. I detect a bit of cedar wood coming through as well with a semi-lasting finish after exhaling slowly.

A third in and the burn is sharp with a dark, compact ash that holds well until tapped off. An abundance of medium to almost full strength smoke is flowing well through the perfect draw with a nice spiciness on the tongue and throat. Flavors are rich and the buttery texture continues in the very smooth smoke, the finish not as lasting as I would like, but still very good on the palate.

It’s a picture perfect day out with lost of sunshine and a clear blue sky. It would be even better without the wind that’s really blowing, but it’s really not effecting smoking the cigar. Everything was consistent through the halfway mark, however towards the end there were a couple draws that tasted a bit bland, which could be attributed to the tobacco still being rather young. Overall this was definitely a very tasty, very good smoke. A Sir Winnie that’s smoking good is hard to beat. 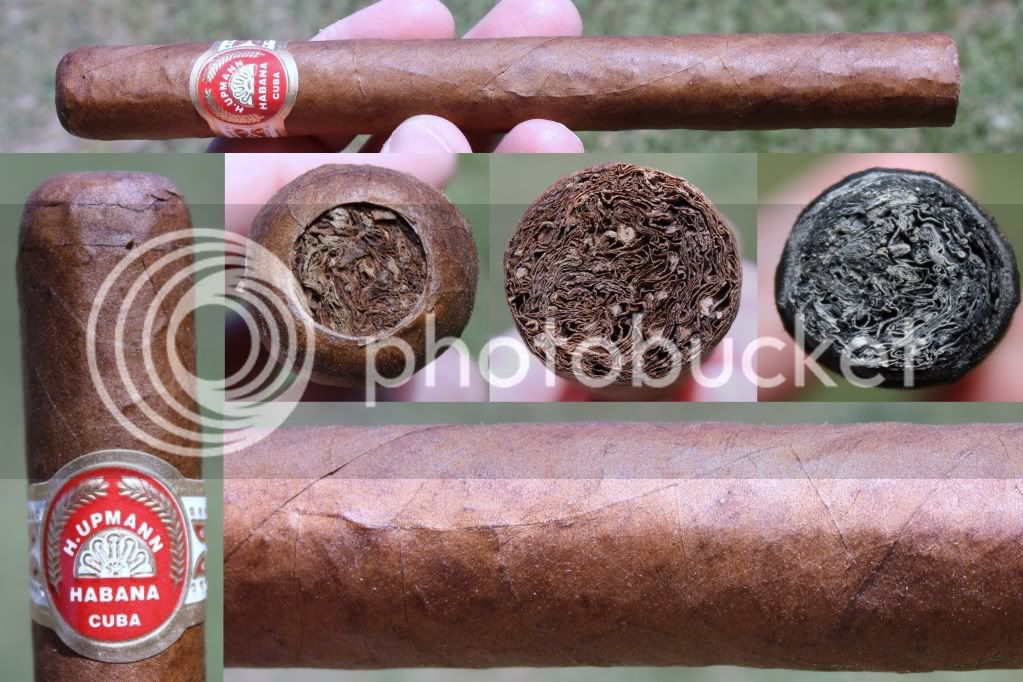 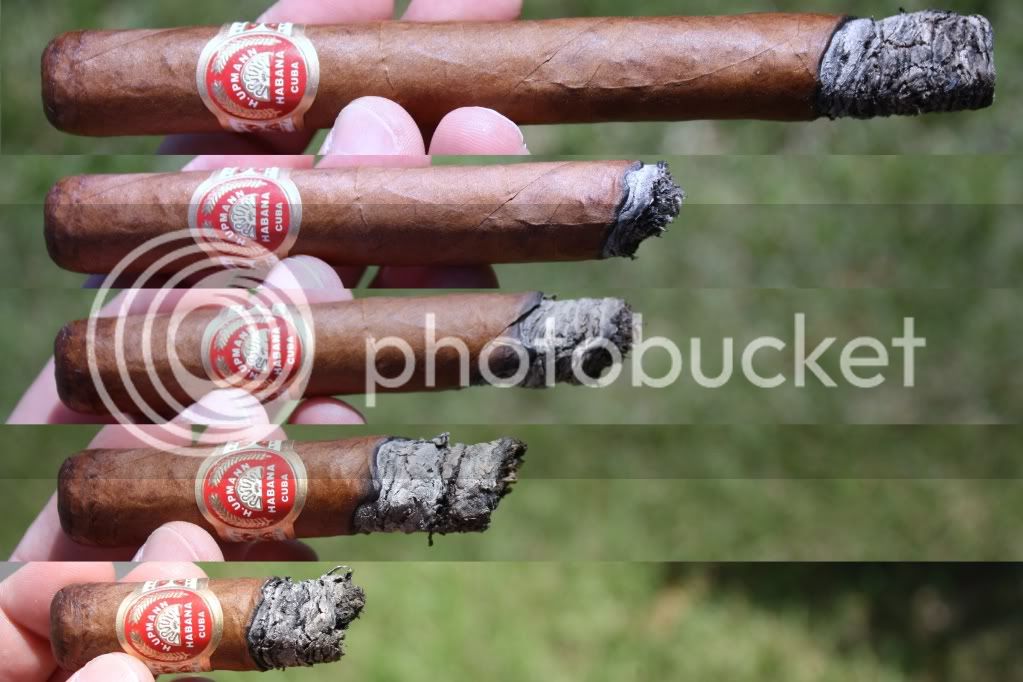 I was wondering where you've been bud, hope everyone is on the mend. I hear you about the pollen, I'm going on week three of watery eyes and running nose. Our deck table has a glass top and gets coated in a yellow film from all the pollen in the air. I have one Sir Winnie left from a 5pack of 03s and am looking forward to lighting that bad boy up in expectations of an epic smoke. Good to have your reviews back. :thumbs:
J

Hi Greg,thanks for the review.
I never had the chance of smoking one.
It is a really good cigar from what I read
and from your review I can understand that it was ON.

Glad to hear you feeling better,hope the rest of the family too.

I hope that you and your family are feeling better. I waited a long time to try my first Sir Winnie. It is now one of my absolute favourites.
I always look forward to reading your reviews Greg. Thanks for another great one.
R

I get to give myself a title?

I sincerely enjoy each of your reviews. I will reference many of them shortly, as my taste for possibly (probably) fake puritos has run thin. Unfortunately, Al has yet to open a cigar store in Poland. I think he needs to return to his roots.

I'm happy to read that your family's health is on the rebound...

Hey Greg, happy to see your reviewing again. I'm glad everyone is doing better, nice to see you back!!! :thumbs:

I've never had a Sir Whinny before, I love H.U.'s so I'll have to grab one of these soon!!! Nice review!

x2 on wondering where you have been...wondered what was going on. Miss your reviews. Have always wanted to try one of these. Thanks for the review and hope you and your family find better health soon!

Good to see you well enough to smoke and review again, sir! I missed reading your reviews.

Glad to see you back. I've been wondering why the reviews slowed down too. :thumbs:

I intend to live forever. So far, so good.

Glad to see you back in action Greg. Hopefully you guys are bound for a stretch of good health from here on out! Awesome review as always.

Sup mang! Good to hear your family and you are up and feeling better! I don't know if my first choice of cigars would be a churhill sized smoke

but then again, your palate isn't like normal men! Great review and since I just recently had my first Sir Winnie, I know exactly what you are talking about. Great smoke indeed!

Welcome back! I'm glad to hear the health issues have past. Here's hoping for a healthy happy summer. Thanks for the review. The 08 Winnies I've had have been really good, and I get the feeling they will be even better in a year or two.

I tried smoking a Sir Winnie yesterday too. About halfway in the wind really picked up here and it basically ruined the cigar. I'm glad you got to enjoy yours!

Nice review Greg, and glad to hear that you and your's are coming along.

This is one cigar that I have tried several times, and every time I am able to get my hands on one, from a range of years, it is plugged. A dowel.
Now that is frustrating. Have you smoked enough of these to say that is a fairly common issue? Or, is Winnie jinxing me from the grave? I thought he liked Italians? Oh wait, that was Einstein.

What a freaking wonderful smoke. I enjoyed one 2 days ago. I love these cigars, I just pulled trigger on a box.

Thank you for the review Greg. Brings me joy to see others enjoying this cigar!

MadMonk said:
Nice review Greg, and glad to hear that you and your's are coming along.

This is one cigar that I have tried several times, and every time I am able to get my hands on one, from a range of years, it is plugged. A dowel.
Now that is frustrating. Have you smoked enough of these to say that is a fairly common issue? Or, is Winnie jinxing me from the grave? I thought he liked Italians? Oh wait, that was Einstein.
Click to expand...

I've smoked through about a box and a half of Sir Winnies, most were the 2003 code, and as far as I can recall have never had one plugged. Shame you've not had one with a perfect draw as these are some of the best smokes, at least to my palate.

No One of Consequence