In an effort to get people to relax and populate the dance floor in the classic Seinfeld episode, Elaine bravely started things off all by herself. In that same vein I’m going to post the first review here in hopes that more people post their views on the tobacco they are enjoying. And if you thought Ms. Benes’ efforts were clunky and awkward, she ain’t got nothing on me.


Drucquer and Sons Blairgowrie
​
I don’t know a whole lot on the history of Drucquer & Sons, but this iteration is made by the renowned GL Pease and is classified as a traditional Scottish blend. The tin has an old fashioned and classic look to it and is quite appealing to my eyes. The tin note is a wonderful, funky and complex aroma. There are stewed fruits, raisin, smoky campfire and an oddly appealing barnyard aroma. Not exactly like the barnyard aroma you get from some young Cuban cigars, but not all that different either. I thought the barnyard might be because the tin was packed when moist but I only had to dry it out for 10 minutes tops before it felt right for lighting. I packed my pipe using the Frank method and after a couple of charring lights we were in business.

The first few puffs mirrored the tin note except there was no barnyard in either the taste or smoke. A more if a bread/yeast taste developed and was a nice compliment to the smoky Latakia spicy Perique, both of which were evident and added wonderfully to the taste. These flavors were present through the smoke with the only change being the emergence of a slight creaminess in the last third. It wasn’t something I usually associate with pipe tobacco but I enjoyed it. I’m not talking the kind of creaminess you get with a Monte #2 or anything approaching that, but it was subtlety present and added another layer of complexity to this experience.

Overall this was a wonderful smoke; rich and complex and deserving of the high marks I’ve seen it get. Smoke time was just a hair over two hours with just a relight or two and a little gurgle in the last 20 minutes that I put down to my inexperience and not the pipe or tobacco. On a five star scale I would give it five stars and recommend it without hesitation.

Alright, who’s next on the dance floor. 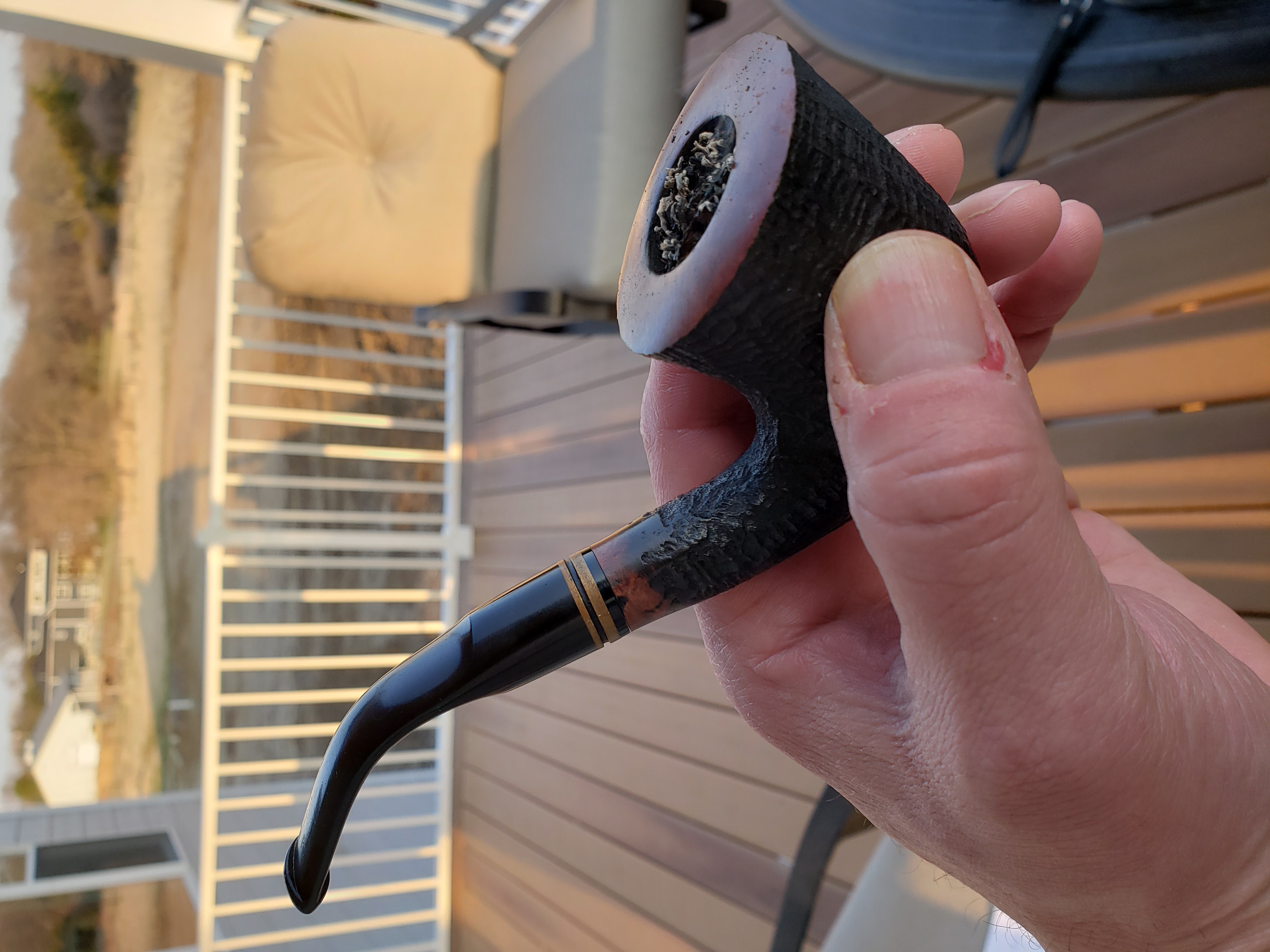 My hand modeling career was going nowhere so I reverted back to my nervous habit.

I wish I had the tastes to give a competent review of pipe tobacco, but at this point in time I feel even more feeble than trying to review a cigar. But regardless of my inexperience, I hope this forum grows. I'll be reading up.

The Black Cloud said:
I wish I had the tastes to give a competent review of pipe tobacco, but at this point in time I feel even more feeble than trying to review a cigar. But regardless of my inexperience, I hope this forum grows. I'll be reading up.
Click to expand...

Nonsense. I can't smoke for the next couple of days at least because allergies are currently kicking my ass big time, so I had some extra time to devote to a review. But just a few thoughts and descriptors is all it really need be. I love reading the "What's In Your Pipe" section about all the tobaccos people are enjoying, but being as inexperienced as I am I then have to go over to tobaccoreviews and look up the tobaccos people on here are smoking. While that site is great, I'd much rather hear from people I know and can relate to than strangers.

Though I don't smoke pipe, I found the read refreshing and informative. It was like reading a good novel, held your attention and make me look forward to our next gifted author.

I did a little digging on Drucquer and Sons since I didn't have a whole lot of info on them at the time of the review. It sounds like it was a small pipe shop in Berkeley, CA and is where GL Pease got his start in the world of pipes. Interesting and nostalgic read if you have a few minutes.

I'm a fan of his Trafalgar under the Drucquer marque.

It's got a good bit of Latakia for smoky campfire deliciousness.

Star of the East.
This is a lat bomb and it absolutely delicious.
First light you get the taste of dried pine needles burning. There is a ton of campfire and creosote flavor and the smoke is has a wonderful creamy mouth feel. There's a hint of ketchup in the aftertaste and retrohale. I don't really pick up much else, but there is a nice toasted grain note under the surface, as well. Possibly a touch of dried dark fruit. I'm sure the room note is pretty potent being so heavy on the Latakia, but since I always smoke outdoors, I'll never know. I'd say the flavor is on the strong side of medium, nic hit is middle of the road.
Goes great with black coffee, and I've enjoyed at all times of the day. Some might want to wait until later in the evening, but I'm a bit for this blend.

Price is great in bulk, and a bowl lasts a good long time, and will burn down to the bottom of the bowl. Leaves little moisture, and doesn't bite or get harsh, even though I tend to smoke hard.

King of the Hobo Hut

MoeCizlak said:
My hand modeling career was going nowhere so I reverted back to my nervous habit.
Click to expand...