I'll start off by saying I was conflicted on where to post this...should I put this here because it's something you actually make from a recipe or should I put it in the Spirits Section because it is alcohol based? So, after giving it some serious thought for about half a second, I decided to park it here.

Before I proceed, this all came about because of Chris, Diesel Grinch, who turned me on to this drink a few years back at the Quad State Herf. Here I was, minding my own business visiting everyone at the herf, when Chris pulls me aside and suggests I try a drink he makes at home. I love Chris, he's a great guy's guy and family man who I greatly admire...especially when it comes to things that get you totally drunk off your ass. He brings me over to his area with his two buddies and poured me a short drink with a warning. "Gary, this stuff is so good you'll forget how f*cked up it'll get you". Ha! Me? Get hammered from one or two little glasses of booze? Yeah right! Well, after one taste, it was love at first sip! Now that same year Paul (Tall Paul) had some of that Needle Dick sh*t that was second in taste to this Apple Pie drink but ALLEGEDLY packed the same punch...and between a few glasses of each of the two...I couldn't feel the bottoms of my feet for about 2-3 hours. I knew right then and there I had to make this stuff on my own!

Chris gave me his recipe (below) and I also checked out a few online. I couldn't believe how many different versions of this recipe are out there, some made sense, some were close to Chris's, some were kinda out there adding other flavored liquors to it....like Vanilla flavored vodka or apple schnapps. There was also a difference in how long people cooked it. Chris said to boil it for 10 minutes and that was it...while a good number of the recipes out there said to simmer it (after bringing it to a boil) for about an hour, covered. I figured the longer cooking time could be for two reasons. One, to reduce the water volume to make it more cordial-like (if left uncovered)...and second, to extract more flavor out of the cinnamon sticks. I split the difference and simmered mine about a half an hour after it got to a boil.

2) One gallon of Apple Cider

3) Four (4) cups of brown sugar (some recipes called for only white sugar, I added a little to mine)

6) OPTIONAL...I made up some 'Apple Pie Spice' that I use when I bake a homemade apple pie. This consists of 1 teaspoon of ground cinnamon, a 1/2 teaspoon of nutmeg, and an 1/8 teaspoon of allspice. I mixed them up and threw about 1/3 of it in the pot.

What you'll see here is a half batch....

Combine the apple juice, apple cider, brown sugar, and the cinnamon sticks in a large pot, stir, and bring to a boil for 10 minutes. It smells great in the house.

I then let it stand overnight to cool because every recipe out there says not to add the Everclear to a hot or warm mixture...and Chris said the same. So I cleaned out the jar Chris gave me when he visited me last month....

...when he surprised me with a batch of his...along with some empty 750ml liquor bottles I fished out of the recycling can outside. Hey, as a kid growing up in an Italian family, we were taught that bleach will kill anything! Well, except for a variety of crabs only found in Daytona Beach during the 70s. Anyway, I soaked them in hot water to get the labels off and then let them sit in a cold bleach solution just like you clean your bottles before bottling home brew...and do a good rinse! I woke up this morning, made a cup of coffee, took the cinnamon sticks out of the pot and put one in each bottle and jar. I then added the Everclear to the pot and stirred it up to get ready to bottle. I ladled in the mixture with the help of a funnel as not to hold and tilt the pot and risk spilling any...it didn't take long at all doing it that way.

Like I said, I did a half batch using all half gallon apple drinks, two cups of sugar, 6 cinnamon sticks, and a 750ml bottle of Everclear...and this is what it yielded. As for leaving it at room temperature or refrigerating it after bottling...that seems to be split 50/50, I'm going to put it in my garage where it's cool and dry...barring another Hurricane Sandy.

This is beyond easy to do and overall cost was about 25 bucks...and man, when you taste this stuff, you won't believe how good it is. That is, IF you like the taste of apple pie. If you don't, stand by for the peach version I'll post soon...
Last edited: Oct 21, 2017

I have the exact same recipe!  Damn good stuff!  I need to post the crock pot lemonade moonshine.

Well...WTF are you waiting for Greg?

Well...WTF are you waiting for Greg?

A friend of mine brought me a quart of some of the best Kentucky corn shine I've ever had, and I always make apple pie, so decided to look around for something different.  I actually swiped this from online.

Instructions
I made this last summer with the whole quart of Kentucky shine, ended up with right at 8 quarts from that one, and oh man lemme tell ya that was some gooood stuff!!  I took the lemons after squeezing, cut them into little wheels, and added to the jars.  By time we hit the bottom of the jar, everybody was eating those lemon wheels!    But, don't put em in there if you plan to let it sit up for a long while as they'll start turnin' on ya.  We didn't have to worry about that.

Damn, 2 great sounding recipes to do this weekend...

:laugh:.....you bastid! Where the hell were you two years ago when I needed those sage words of advice Steve?

The Kentucky moonshine that I'm used to actually comes from a still...and, at least with the Eastern Kentucky guys that had access to it, peach is by far the most prominent.  Great recipes here but be sure you're not drinking too much of it while brewing up a batch!  That Everclear sitting beside a gas stove is a shrapnel bomb waiting to happen...

I had a chance once, to try some really great sweet corn liquor and have been chasing the "monkey" ever since!   :thumbs:   It had a really smooth sweet corn taste and, while it burned a bit, it was truly a great sipping liquor.  I don't mind drink in the apple pie stuff on occasion, however if I had my druthers, I'd drink the plain stuff.

I have heard tale that the apple pie and a pool makes girls get naked!!  I believe I was told that by a member of this board, who'll remain nameless (fellow Kentuckian)!!!

Gary, thank you for posting this recipe. I decided to make it today, we are having a little get together for my wife's birthday on Sunday and this is exactly what I needed. I followed the original ingredients without the optional step No. 6.

Next time I make it I will cut down on the sugar as I find it to be a bit too sweet for my taste. 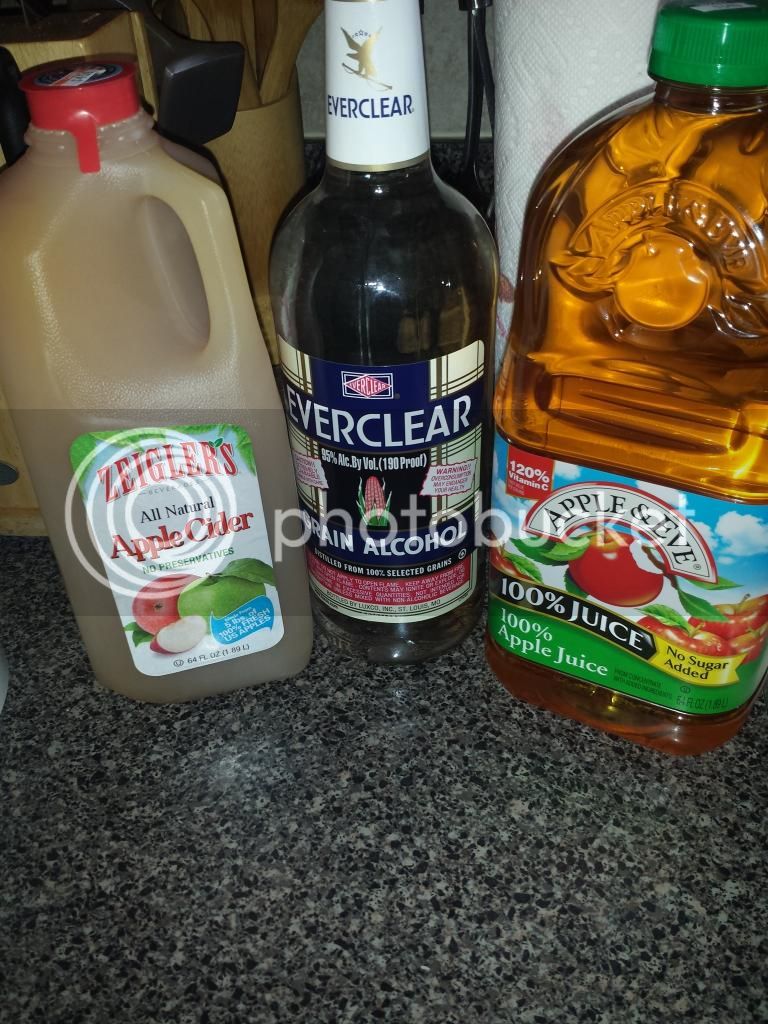 I topped these two bottles and there was about a cup and a half left over, I disposed of it the proper way. 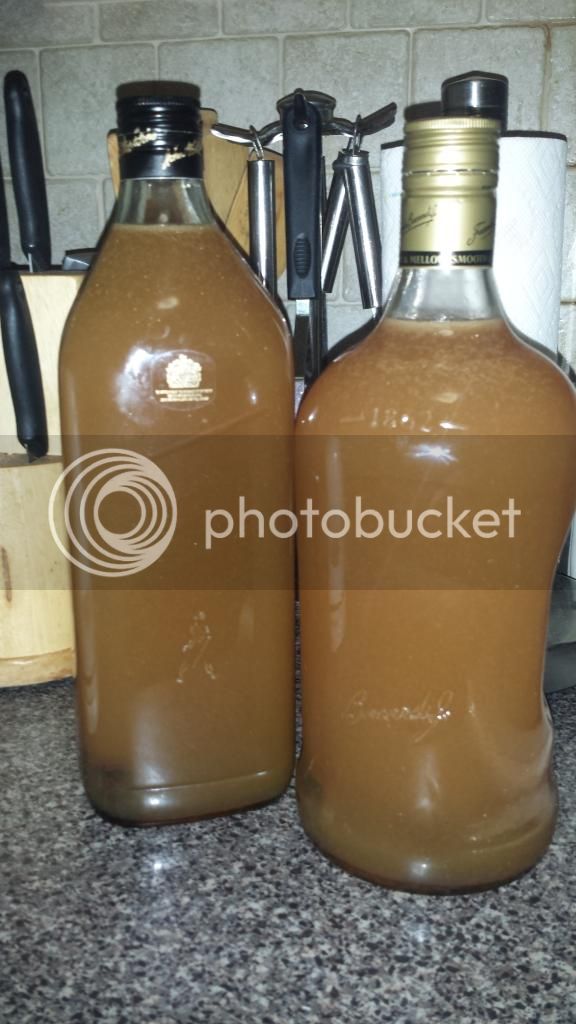 All done!  Actually missing a quart out the pic (left it on the counter), and also had a half gallon jug full as well. Gooood stuff!! 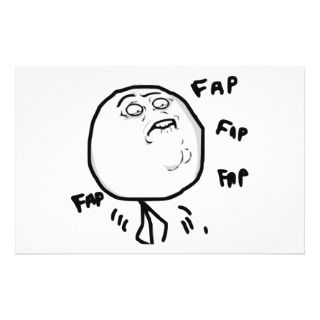 Kudos Gary! There may be an apple pie moonshine contest afoot at the next QSH! :thumbs:

All done!  Actually missing a quart out the pic (left it on the counter), and also had a half gallon jug full as well. Gooood stuff!!

My whole batch was gone yesterday! Everyone is asking me to make them some. What did I get myself into! :laugh:

I will make another batch this weekend but I'll be using one cup of sugar instead of two.

whylieineedacigar said:
My whole batch was gone yesterday! Everyone is asking me to make them some. What did I get myself into! :laugh:

Just remember, without the proper amount of sugar, the Everclear comes forward in a rather harsh way.

Thank you for pointing that out. I will make a small amount first and see how it turns out.

whylieineedacigar said:
My whole batch was gone yesterday! Everyone is asking me to make them some. What did I get myself into! :laugh:

Depending on what sugar you used, you could play with that also.  Maybe try 1 cup of brown and 1 cup of white.  To me brown sugar is more sweet that white sugar, especially when it's cooked down a bit.

My whole batch was gone yesterday! Everyone is asking me to make them some. What did I get myself into! :laugh:

Depending on what sugar you used, you could play with that also.  Maybe try 1 cup of brown and 1 cup of white.  To me brown sugar is more sweet that white sugar, especially when it's cooked down a bit.