This thread is dedicated to the blind reviews of the participants in the Blind Cigar Review - Pay it Forward #2.

Most of us are by no means review experts but there are some simple things you can do to make your review more enjoyable:

"Ah today is the day!" I thought to myself as I rolled out of bed this morning. "Going to give a shot at my first blind review!" I considered doing it this morning, however as I alluded to in an earlier thread, I had a feeling this would not be a morning smoke. I decided to wait until later in the day.

For lunch it was a ham sammich with one of the homegrown tomatoes off one of my 'mater plants. Man it was good too, sweet with that fresh off the vine taste. Oh...sorry...this is a cigar review. :laugh: After eating I gathered all the supplies: Cigar, camera, Swiss Army knife, camera, notebook, pen, wireless mouse, laptop, and a bottle of water. I’m sure it was quite a sight me carrying the goodies out under the good 'ol walnut tree. And of course, Mandy (JRT) followed along. I got everything set-up on the table and fired up the laptop and checked out a favorite movie site and saw Step Brothers was out, so started it up and got comfy for the review. Well, as comfy as one could get in mid to upper 90F! There was a slight breeze that came through every so often, so that and being in the shade wasn't all that bad.

The smoke measured 7 1/2 x 38ish with a very smooth, dark and oily wrapper with the color of a milk chocolate Hershey bar. Very well constructed with what looked to have been a pigtail cap at one time? Hmmmm. Solid weight in the hand and firm with just a little give when squeezed. The foot had very nice bunching to it.

I punched the head with the smallest ring on the knife and pre-draw was perfect. Just enough resistance to not cause too much smoke to flow through. Remember me saying it had the color of a Hershey bar? Well, I can tell you it also had a definite chocolate taste pre-draw. Rich tobacco flavor at the core. Waiting no longer, I put fire to the foot. There was definitely a dark cocoa in the smoke. Smooth, almost velvety over the tongue. A good bit of spice, that of white pepper, on the back of the throat. A bit of earth and wood as well. However, the primary flavor was that of rich cocoa. The ash began to form and was a solid white, holding on for about the first inch before ashing itself. It seems there was a baked bread flavor coming through at times with the spiciness and cocoa core continuing.

At the beginning I'd say the smoke was a medium closely bordering on full strength, and I was taking some fairly healthy draws. However, around the halfway mark it gathered in strength becoming quite powerful to where I had to reduce the deep draw I had been taking. I'll say the primary cocoa flavor somewhat subsided and the baked bread, possibly sweet pumpernickel came to the front. As I got closer to the end, flavors started to dull a bit and heat began to build. I really had to slow down on the draw, and in the end there was a bit of bitterness I think mostly from getting too hot. The smoke lasted right at an hour and fifteen minutes.

As for my guess at this mystery stick, I'll say it was a La Flor Dominicana Ligero Lancero.

Jonas - Thank you for the opportunity to do this! I thoroughly enjoyed this smoke and trying my first blind review. Even if I don't get it right! Thanks again!! 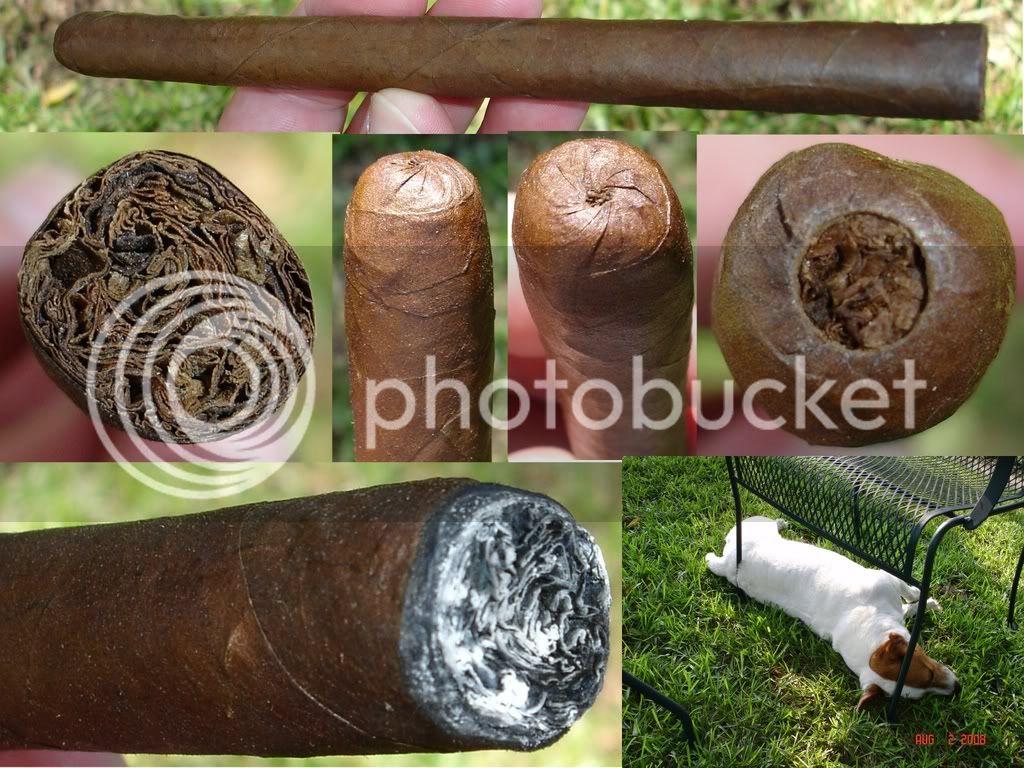 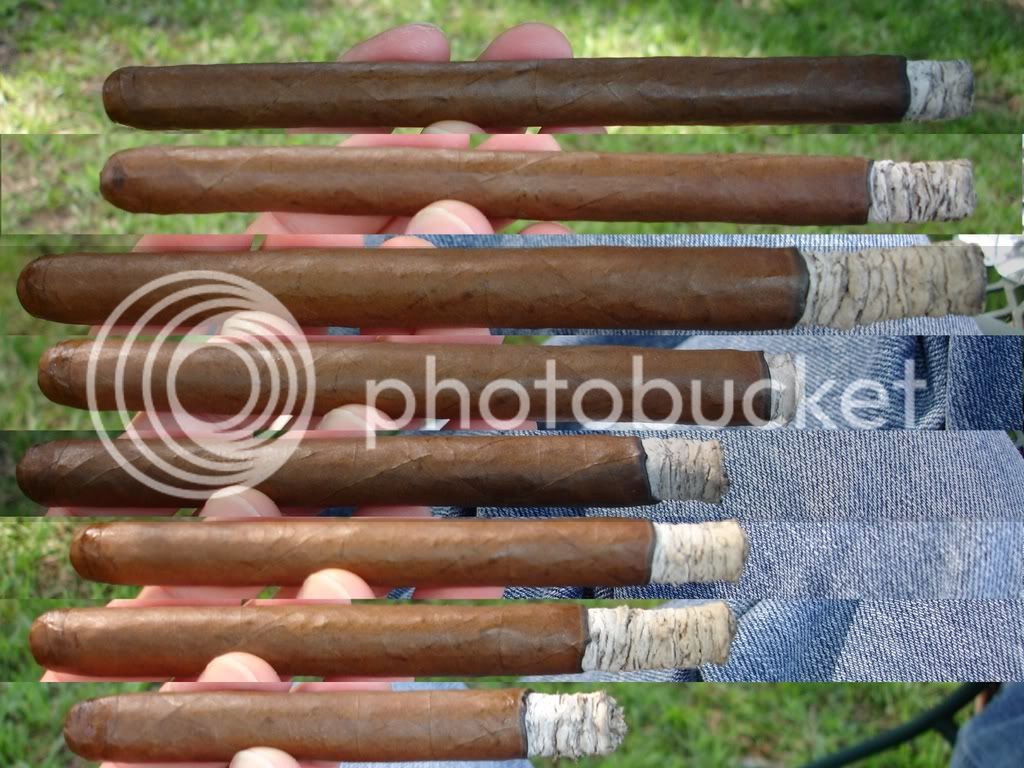 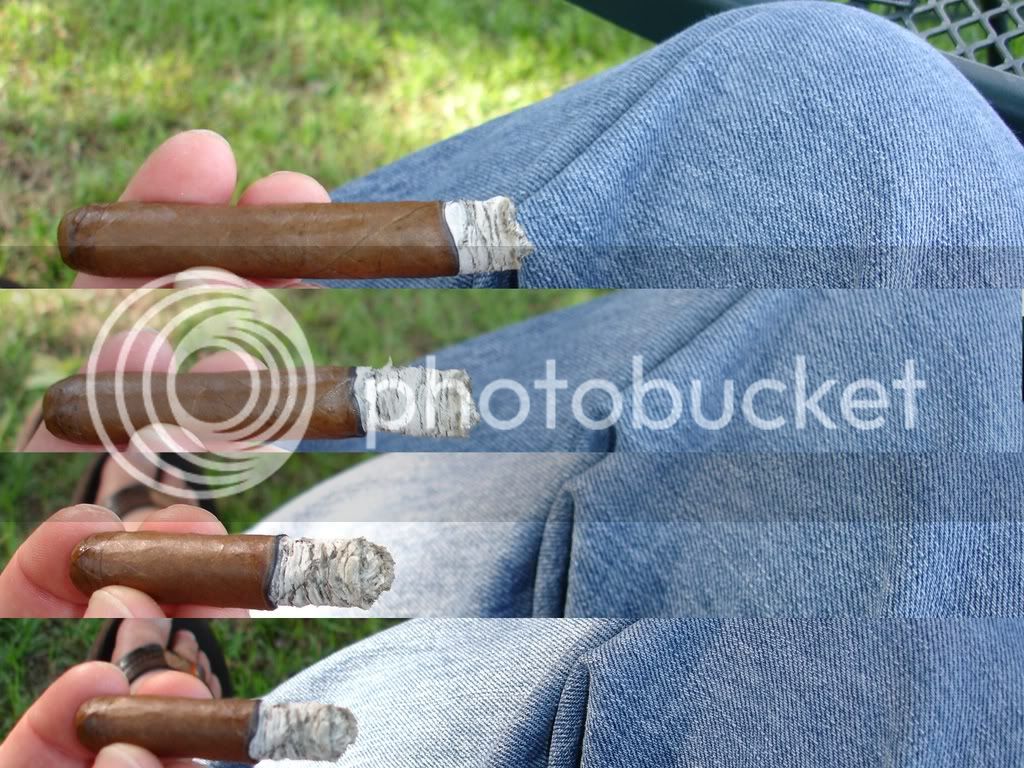 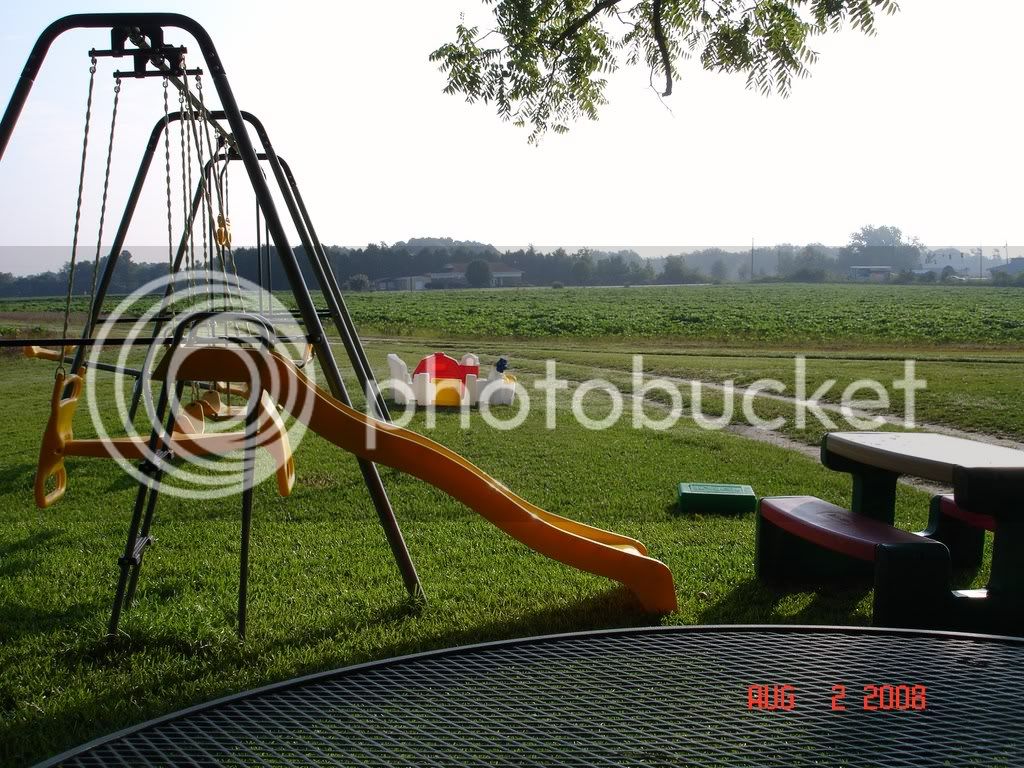 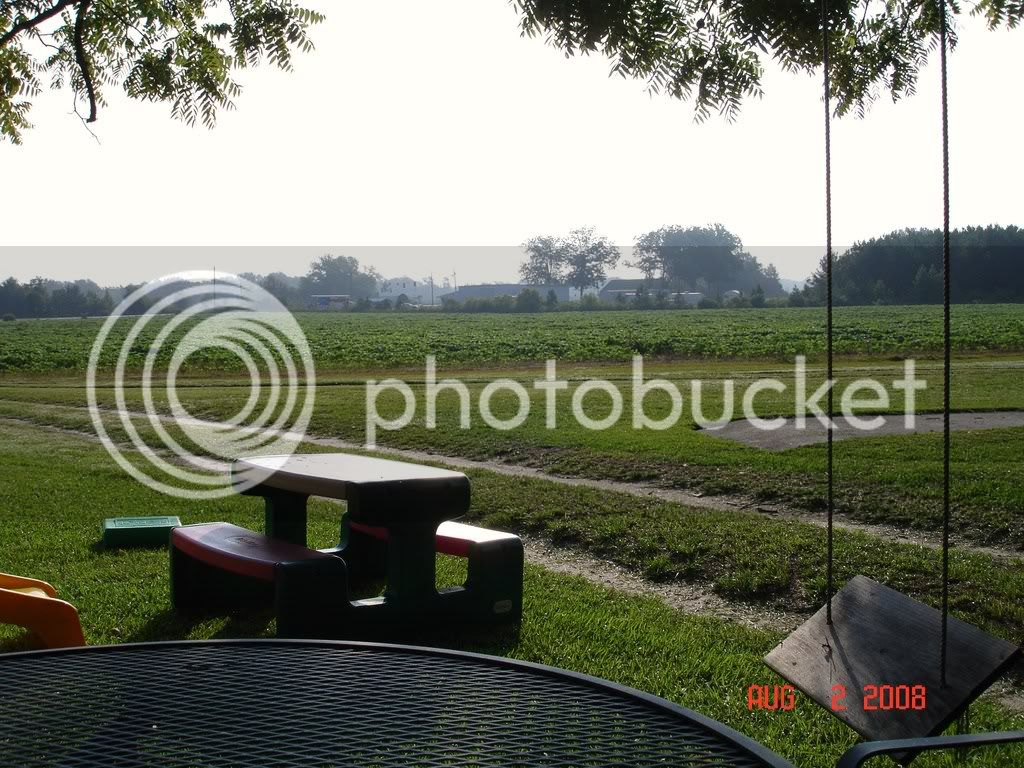 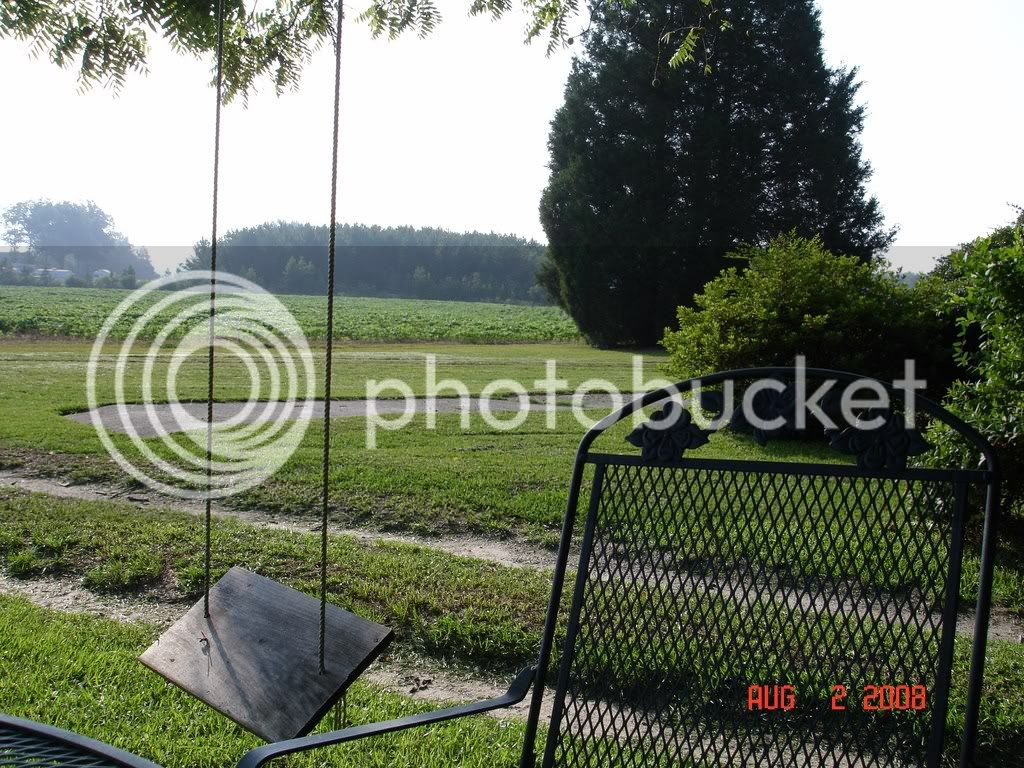 Greg, my man, that is one heck of a back yard you've got there! What's in the fields?

Seanholio said:
Greg, my man, that is one heck of a back yard you've got there! What's in the fields?
Click to expand...

That's actually my front yard. Those are soy bean right now. They just harvested oats and then laid these down right after.

Antz... you gotta tell us what it was after one of those uber-pictoral reviews of yours. Always makin' me drool dude! :whistling:

Sorry, we had a severe storm come through and knocked the power out. Power's back finally, however...NO A/C!! Hopefully we can get someone out first thing in the morning or we're gonna be in some serious heat.

Anyways, I was kinda nervous opening the envelope. I felt like Charlie opening up that last Wonka Bar! :laugh: Sure nuff....I got the golden ticket!! 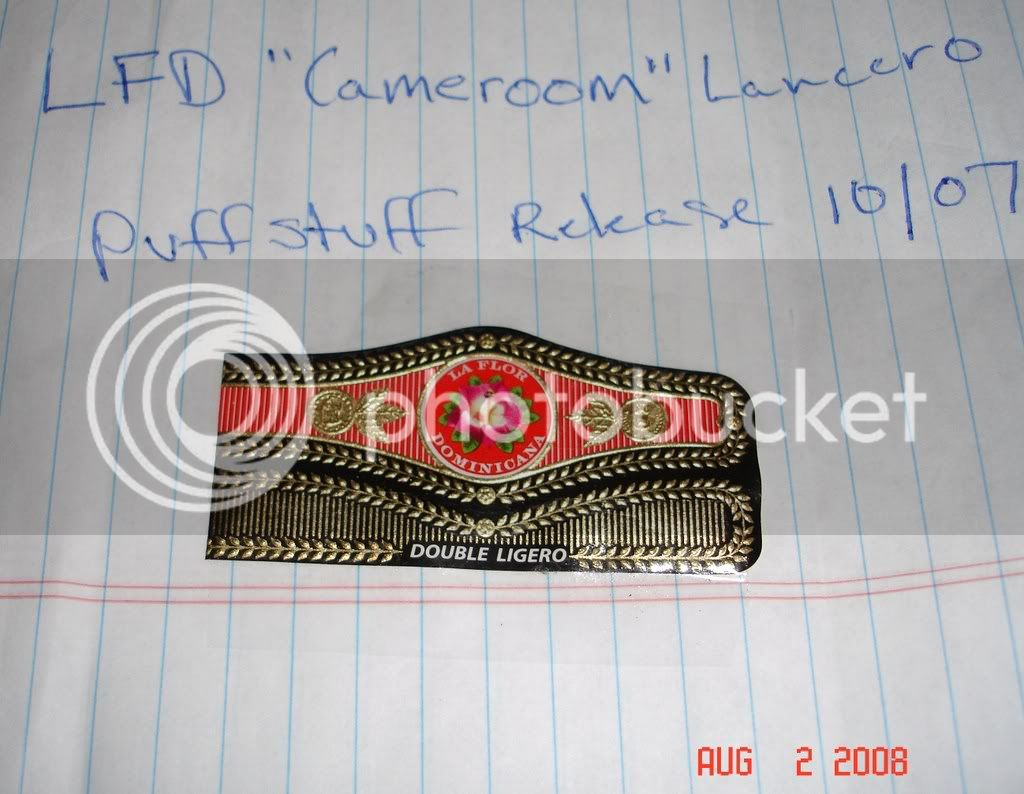 Wow, and guessed it, although didn't guess it in total. lol. Just playing with ya bro! Very nice review and guess. So now what??

Finally I had some time to sit down and relax so what better time to enjoy a smoke and do a reveiw.
This cigar measures 4 1/2x I'd say 48 don't think its a 50 ring. The wrapper looks delicate, my guess Camaroon. It has one small thin vein running down one side. This cigar looks aged.

Construction and draw are flawless. Pre-light draw I can taste a faint sweet tobacco taste.
Toasted the foot and this stick lit up right away. First couple of draws the smoke was light and tastse of caramel and slight sweet coffee.

.
The first third of this stick is mild and easily rolled thru the nose. The ash is stacked and grayish white. The burn was perfect. The cigar is reminding me of a Fuente but the size has me baffeled.
Second third the cigar is building in strenght to meduim and more coffee than sweet tobacco. Taste of woos coming thru. The cigar didn't ash itself until the beginning of the last third (all over myself)

Last third more wood and now leather coming thru. This cigar has me stumped, but I know I've smoked this stick before. This stick is complex in flavor and strenght. I enjoyed it very much. On a scale of 1-10 I'd give it a strong 8.

Thanks again Greg for a beautiful smoke. My guess is and because of the size of this smoke and I'm a fan of Partagas is Partagas 160 Minor. The cigar is

Right on the money :thumbs: . Looks like we are 2 for 2. Thanks very much I enjoyed this PIF

I'm pretty sure I will fix that. I'm not very good at identifying cigars, yet. We shall see.

Not to fear, I'm sure that most of us (including me) would fall on our faces as well.

I took some time last night to smoke my blinder.

I went to the local Avenue of Rich People Spending Money, Santana Row, and settled my ass down in a chair with a table next to me so I could kick back, watch the girls walk by, and enjoy the cigar. Unfortunately, night photography is not my forte, so I can only post those pictures that came out OK.

The cigar was around 6" long and approximately a 48 ring, but it swells in the middle to a larger size (50?) and then back down to a 48. The foot smelled of tobacco, and nothing more, to me. I punched the cap, and the draw was easy, with an oily sensation on the lips, and no particular taste to the draw. The cigar is well constructed, with a single vein hidden below the wrapper leaf.

Upon toasting and drawing, the mild corojo flavor (?) and spice come through, with a nice, easy smoke. After an inch or so, though the easy draw disappears on me, and the smoke begins to thin. I cut the cap after this, sending ash everywhere but revealing a whole new cigar. A rich, creamy smoke delivers plentiful flavor, predominantly what I believe to be corojo, with pleasant background notes that harmonize well.

At the halfway mark, I purged the cigar, as things were going sour and not at all the character of what had gone before. I am rewarded with a restoration of the flavors, strengthening somewhat. The wrapper begins to suffer, and I think this was caused by cutting the cap after having smoked for half an hour. I relight, as the cigar is starting to burn funny as well.

Then the nicotine buzz hits. It's not a slug in the gut, but it does get my head a little off-balance.

With 2" left on the cigar, I put it down. Even sipping the cigar with long breaks is resulting in just a hot taste in my mouth.

I've never tasted a cigar like this before, but the closest I could guess was a La Flor Dominicana Special Edition of some sort, but I don't know what it would be. I could not have been farther off target, it seems.

It turns out this is a Camacho Diploma Corojo 11/18. Thank you for the excellent treat, Brian!

If anyone can confirm or correct me: the predominant flavor I'm detecting in this cigar is the Corojo leaf, right?

Great review Sean! I've got one of these in the humi letting it get some time to hopefully mellow a bit.

Good job! You had the corojo right on the money.

br174 said:
Good job! You had the corojo right on the money.

Thanks Brian! That was one amazing smoke. I can only imagine how nice they're going to be with some age on them. Hooowee!

Time to rethink my everything

Nimrod said:
I was reading Holts Catalog today and this is what it said about the Camacho Corojo

No, I missed the Camacho possibility because I've not smoked a Camacho before, and I didn't want to taint my guess with research and googling to help me. That would have felt like cheating.

Even if I'd had the experience with Camacho, the punched cap really would have thrown me off for the first half of the cigar. It was amazing how the cigar opened up, literally and figuratively, when I finally cut the cap.