I really like a tubed cigar for some reason. I especially like how this one has a slip-on top instead of a screw-on cap. Pretty cool! It has nice red and white colors, which works well for the presentation.

Once opened, I of course get a wonderful mixed smell of cedar and tobacco. The cigar itself has quite a rich tobacco aroma. It has a coarse medium brown wrapper with a patchwork of veins throughout. Not much by way of oils can be seen. There’s a solid weight to it in the hand and firm when squeezed with the slightest give. It shows good bunching in the foot and a bit of an awry triple cap.

Punched, pre-draw seems quite loose, and I get tastes of earth, a hint of cocoa, and nuts in the coolness. I put fire to the foot and volumes of smoke pour from the forming embers.

First draw and I’m immediately hit with a powerfully spicy smoke. Black pepper this is. I detect cedar and leather behind it however. Several more draws, and the smoke begins to tame down a bit and the black pepper spice lands on the back of the throat perfectly. I’m getting the typical RYJ profile of a semi sweet fruitiness with fresh hay. Leather is somewhere underneath with a touch of rich cocoa. It has a very nice long finish that’s simply wonderful.

The draw isn’t perfect, but still good enough. I do have to take it easy when pulling the smoke through as it’s quite full. There’s tons of smoke to be had in the perfect, razor sharp burn. The ash was solid and held on for the first ¾” and then dropped. I was hoping it would hold for the duration, but alas it didn’t happen.

I’ve had other short churchills, however this was my first tubed and I’ll admit it somewhat kicked my arse! I overdrew a couple of times and got somewhat woozy from the power in it. It’s too bad this is the only one (I believe it was from 2005) I had as I’d love to have tried another in another year or two to see if the power subsided a bit.

Note: I noticed while working on the pictures that there was a small amount of mold on the foot that I didn’t notice before smoking. Maybe that’s what was kicking my arse! :laugh: 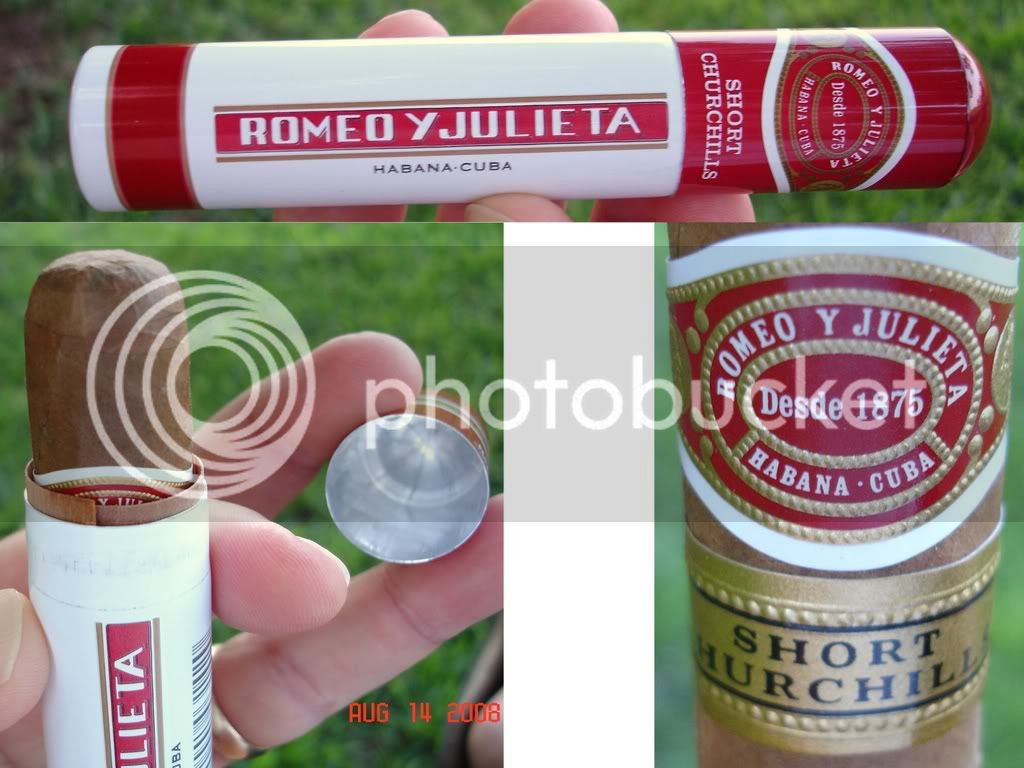 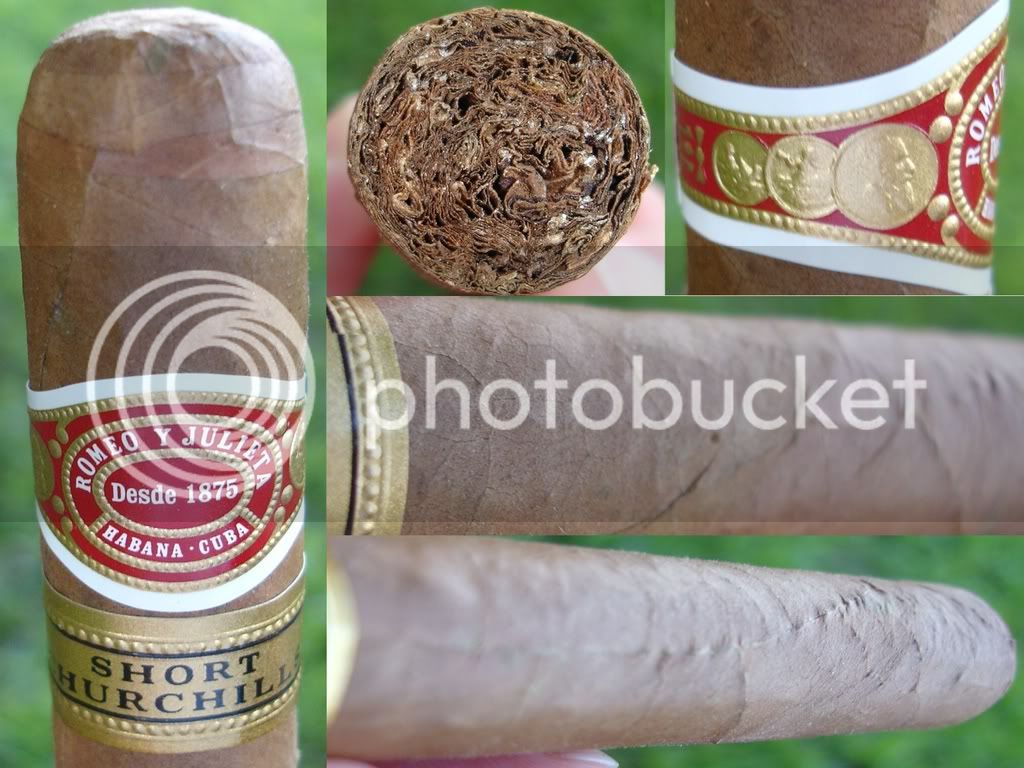 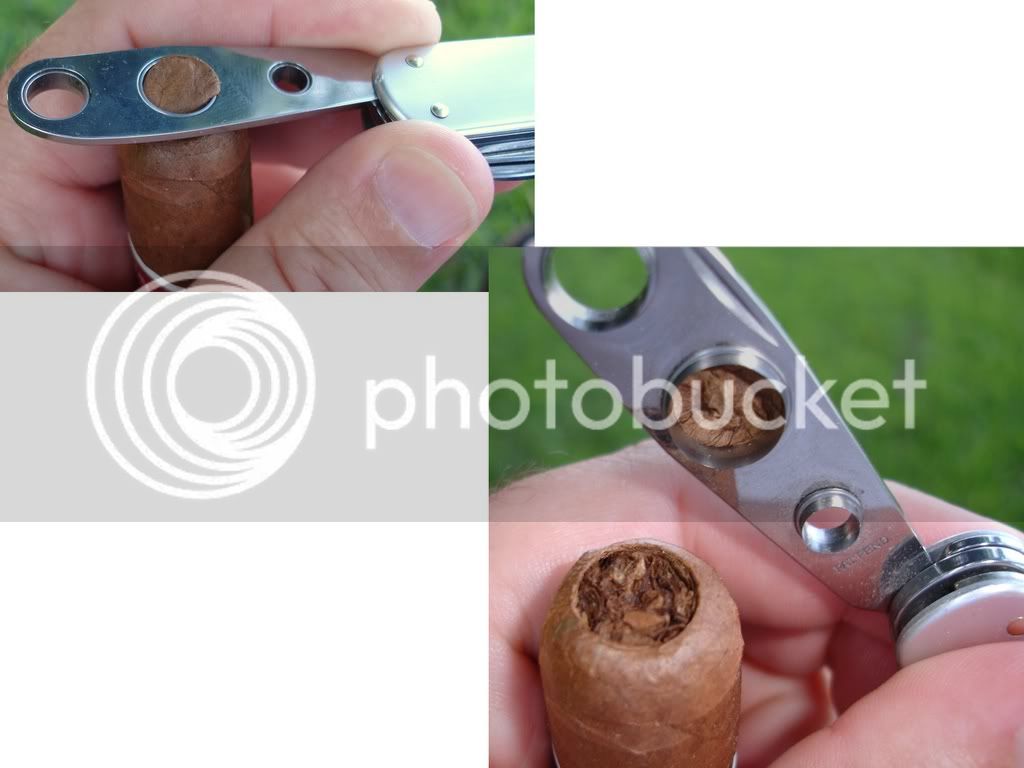 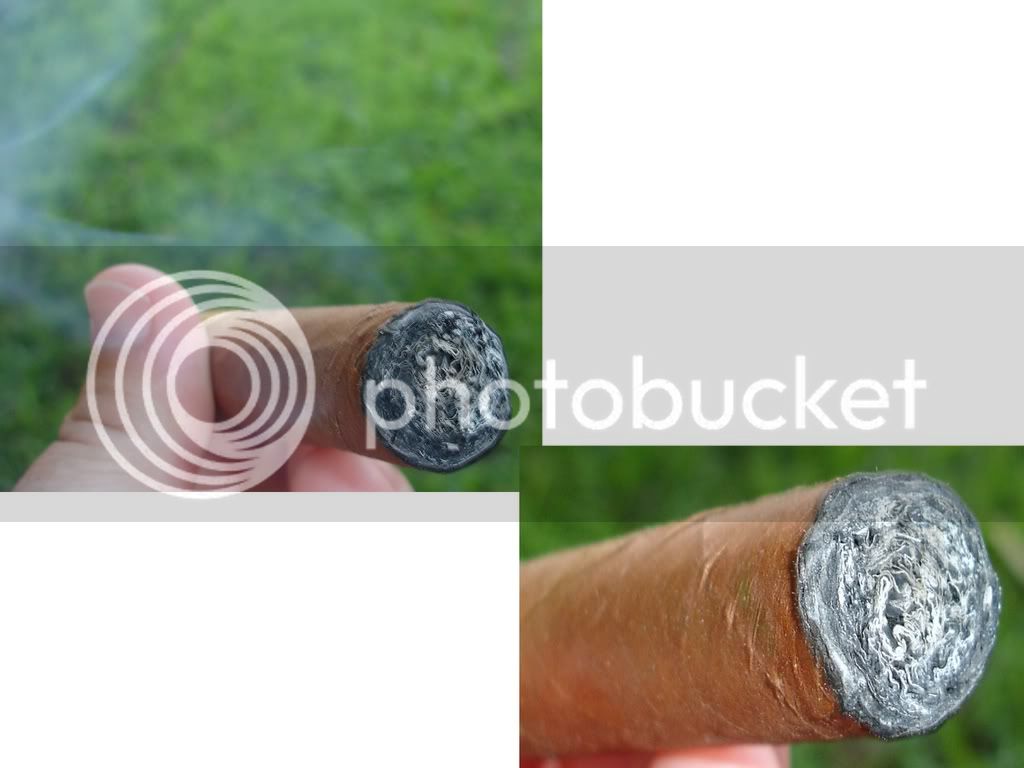 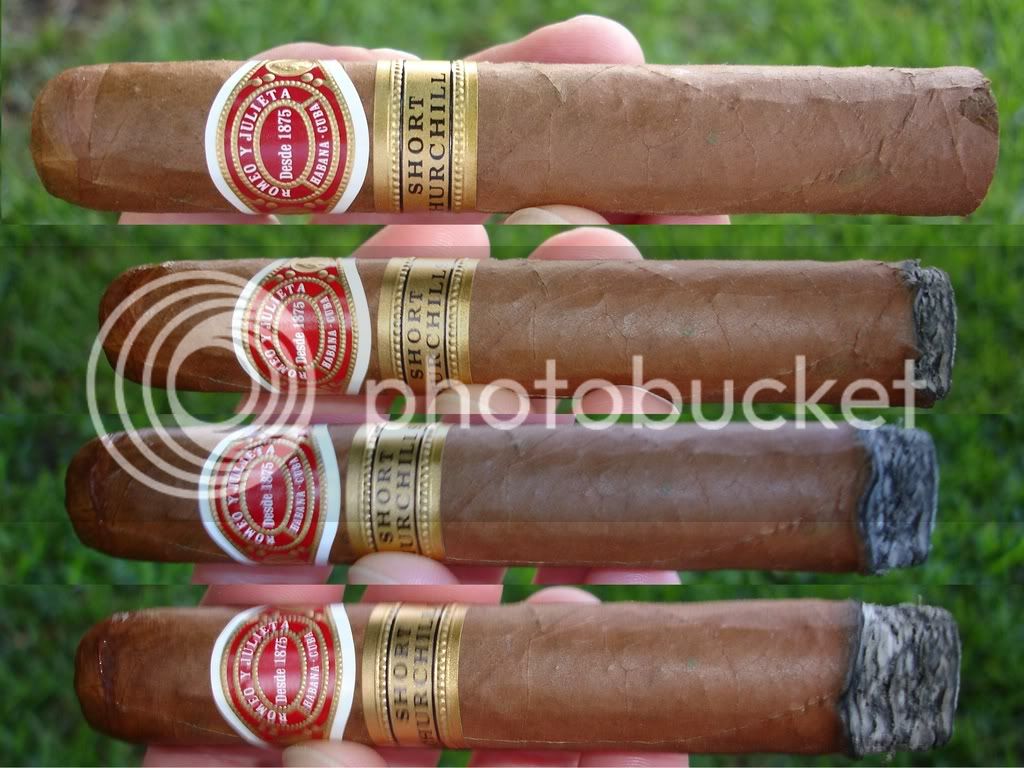 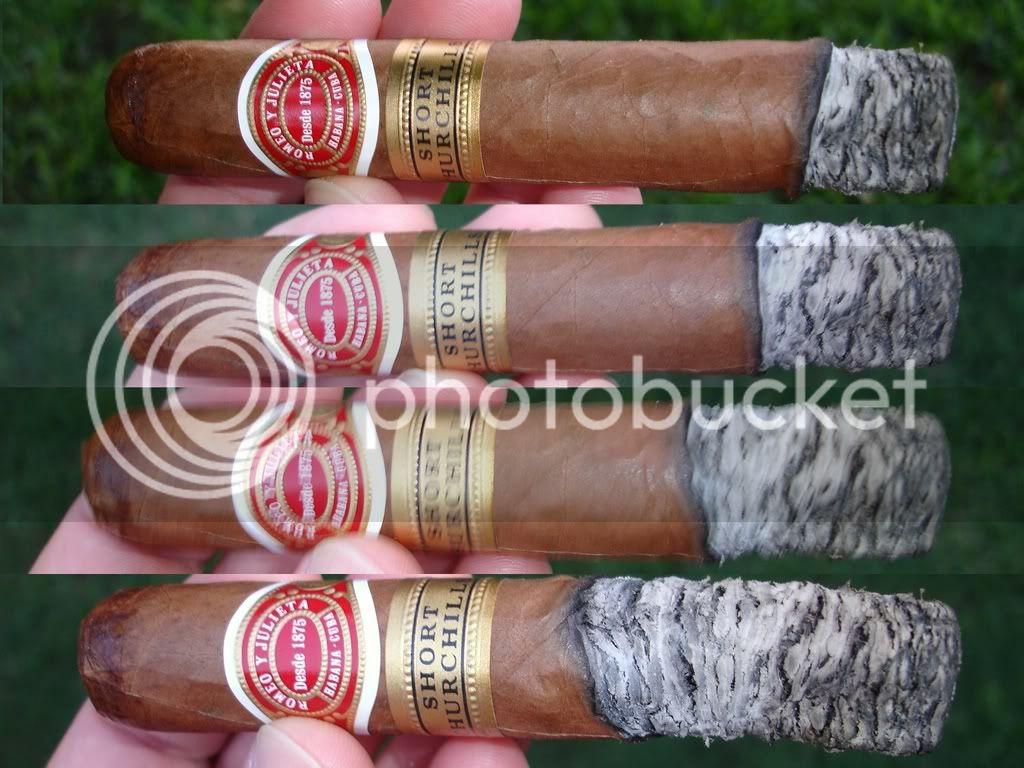 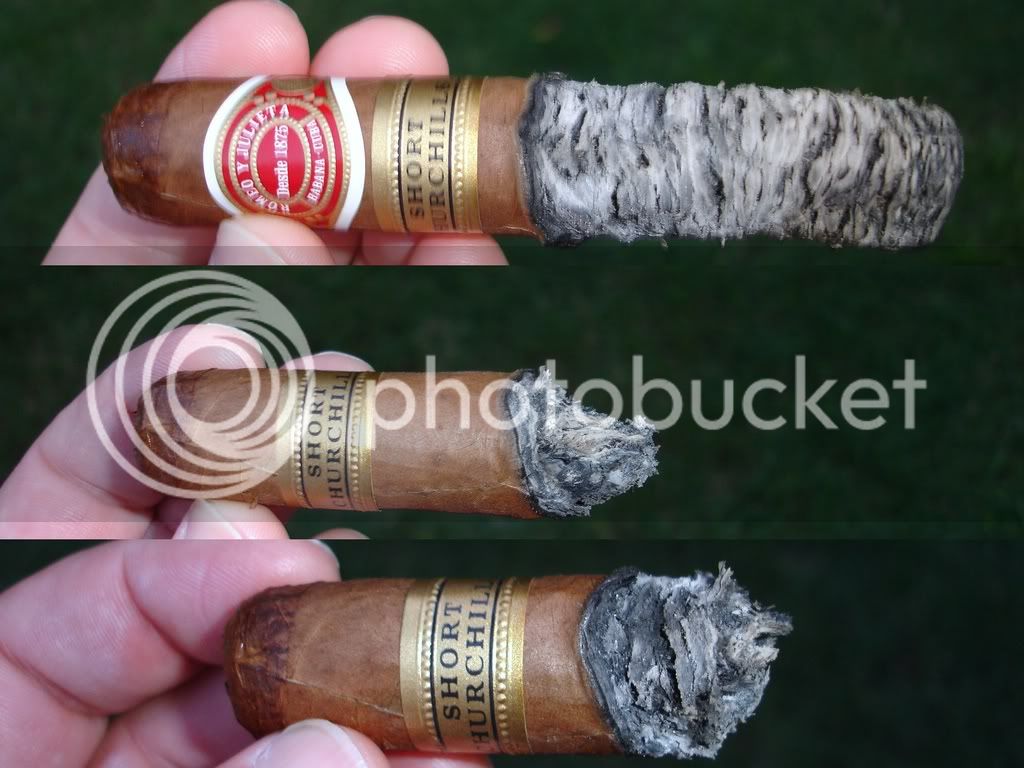 That sounds wonderful Greg. I've got one of these resting for a special occasion. Thanks for giving me some intel on what sounds like a great smoke.
C

Very nice review Greg. The flavors in this cigar are exactly as you discribed. Leathery, spicey with cocoa and a very long finish. Bravo on the review and pics. I believe this cigar was released in 2006 with the tubed version following in early 2007. The strenght may actualy be from its youth.

I intend to live forever. So far, so good.

Once again an awesome review Greg. I love these guys a lot, but this is one of those cubans that has that "youthful" taste. That being said, it is still a superb cigar when young, and will be AMAZING down the road. Thanks for the review brother!!!

Excellent review as usual. I got a distinctive graham cracker component from this cigar, which I really enjoyed. The trouble is that I haven't yet found another one of these beauties! :laugh:

Great review, I just love this cigar in the tubo format! Thanks for sharing the review and pictures :thumbs:

RyJ Tubos are to be found in 24/7's around our country, in tiny cabinet humidors that over humidify by at least 10%. It is an unfitting resting place for a fine cigar, and has provided many a curious smoker a bad first impression with Cuban Tobacco.

In my mind, because of the neglect they suffer (and the subsequent identity of cheapness they assume for this), Tubos = Evil.

Was this the one from the sampler I sold you?

Ironically, I smoked my last one already!

Was this the one from the sampler I sold you?

Ironically, I smoked my last one already!
Click to expand...

AH!! I was trying my best to remember where I got this from! :laugh: No, I didn't write it down or put a blank band on it. Bad me! Bad Bad Bad!

Thanks for the experience. Yeah, a shame WE don't have more of 'em!

Great review of a cigar I have been wanting to try, thanks.
Chris

Nice review. Greg, can you discern a flavor difference between a tubed and non-tubed cigar or do you just enjoy the presentation better?

ChiTown_Huck said:
Nice review. Greg, can you discern a flavor difference between a tubed and non-tubed cigar or do you just enjoy the presentation better?
Click to expand...

It's really hard to say as the other short churchills I've smoked had a good bit of age on them whereas this one didn't. They both had the same profile IMO, this one was just stronger.

I know I've smoked Bolivar Petit Coronas from a dress box and a cab and also had Bolivar No. 2 Tubos (same size), and I thought the tubo had more of a richness to it.

You can observe a lot by just watching

Thanks for another great review! These look wonderful, and the tubo makes them look that much better.
C

lordlister said:
Thanks for another great review! These look wonderful, and the tubo makes them look that much better.
Click to expand...

Great review Greg, with spot on descriptions of the flavors I believe. I bought a box of the non-tubed when they first came out. I just had one a few months back, and promptly put another box away right after. This cigar will age beautifully to become a classic IMHO.
H

Just finished one from '06 (non-tube). I've got to be honest, I wasn't that impressed. It had some uneven burn issues in the beginning and in the end. I would have considered it a more mild smoke - I am not able to pick out a lot of scents/tastes like others on the board, other than the leather hints I noticed this evening. I still have have a bunch left, maybe they just some more age on them. That said, I am glad for the other folks that have had and enjoyed them.