Well we are all aware of the recent war where some Noobies thought they would pick on some FOGs. Little did they know that we are all just Brothers & Sisters of the Leaf. But we had a bunch of fun in the process. During the war I got a little carried away and ... well, built a big ass bomb.

I couldn't put a really good cigar in there because, a) I didn't want to see a good cigar get damaged, b) the chemical reaction that hardens the epoxy ends up tainting the cigars, and c) it seemed funny as hell. I asked the recipient, enerjay, to show how he disarmed the bomb and to post a review of the cigar. I figured it would come out then that the cigar wasn't really a davidoff.

But no .. he decides to bring it to Vegas and smoke it with me. I happened to be sharing a room with him during the HERF and he showed it to me several times over the weekend. I kept saying, "no man, it's all you. Enjoy it and write a review." But he keeps holding onto it .. waiting for when the best time to smoke the sacred cigar.

Finally he decides to bring it to the CP HERF and share it with all of the BOTLs at the HERF. After tasman presented the Ammo can to the lucky winner, denverdog, enerjay stands up and announces to everyone that he is willing to share his prized booty with anyone at the HERF who would like to try it.

He then proceeds to ask several people what year and vitola it was because I wouldn't tell him. He then gets all excited and decides to light it. Look at this happy man.

True to his word, he proceeds to share his prized cigar with his newfound friends: "This is awesome" - denverdog

At this point I can't see it continue. So I stood up and made an announcement. I told them that I the cigar was not a davidoff, but a belinda w/ a cuban davidoff band. That it was deception in part of the war, and I didn't think it would go on this far. There was a long silence, then some mumbling ("you're kidding', "no way", "I went through all that for a yard gar") .. then denverdog blurts out "FOGS RULE!" There was a lot of shock and surprised mumblings and agreement. Then dave asked me to teach him how to keep a poker face like that; "how did you keep a straight face the whole time?"

And while it was pretty funny, I was the one humbled through this experience. My hat is off to Jay. He was willing to share the highly sought after, rare cigar with people he had only recently met, instead of hording it for himself. And he has been one hell of a good sport through it all. Fortunately for me, I have made a really good friend at this year's HERF.

Well did you wind up giving him the real Davidoff or not?

Martin2D said:
Well did you wind up giving him the real Davidoff or not?
Click to expand...

No, it isn't mine to give. The pictures I took of the Dom Peringon were of my friend's Davidoff. That is about as close as I have gotten to one.

Cory, that was a great ambush, You rocks!
A

Now that was a cool story.

Blue Dragon said:
He then proceeds to ask several people what year and vitola it was because I wouldn't tell him. He then gets all excited and decides to light it. Look at this happy man.

True to his word, he proceeds to share his prized cigar with his newfound friends: "This is awesome" - denverdog

At this point I can't see it continue. So I stood up and made an announcement. I told them that I the cigar was not a davidoff, but a belinda w/ a cuban davidoff band.
Click to expand...

heh... amazing how powerful expectations are, isn't it?

Now that was a great ambush and a great story!! It will go down in the annals of CP!! :laugh:

Somebody owes somebody an ass whoopin

Amends must be made!

Jay, this is the exact reason I now have a very cool paperweight!

Well done on all parts, I would have loved to see that whole thing play out from your eyes, but the review of the experience was a damn good second.

Well done gents, funny how perception can be convinced. Shit, that's how I got my lovely wife to marry me =)

Sleeping not so peacefully

:laugh: For the love of...that was soooo wrong. Funny as hell but wrong :sign:

That was a world class punk and Jay, you showed pure class in sharing what you thought was a prized cigar and then not kicking some dragon a$$ afterwards. Kudos for letting him out of that room alive. :laugh:

This thread is hilarious, and the pictures speak a THOUSAND words! I wish I could have been there with you guys. I feel bad for Jay though.....almost like a kid who waits all year for Santa to bring him that very special toy, only to open the box and see some old knitted shirt that Grandma whipped together out of recycled yard from the 1950's.
G

Holy cow! Now that was a first class punking.

And Jay, you are one class act. Kudos to you! :thumbs:

There is no doubt, had you said nothing, the power of the mind would have taken over. It is what it is right?

I, for one, would not let a good deed like this go unpunished. I hate to even imagine the payback you've got coming, Cory!

This was a fantastic punk by BD, but if I am not mistaken Jay may have some sort of payback up his sleeve... :whistling:

Seriously, Cory just stood there not even cracking a smile as we passed that bad boy around, each person acting as if they were touching a pair of boobies for the very first time. Once everyone who wanted had a taste he said "I have an announcement to make!" Of course we all just assumed he was finally coming out of the closet but we were wrong and this was better.

Well done Cory, and Jay you took it like a man? :laugh:

That's kind of fucked up, man. You didn't even have the real cigar to back up the punking? At least it sounds like everyone enjoyed themselves in Vegas.

Kudos to Jay for taking it all in stride and offering to share what he thought was a rare cigar, though. You the man...

AVB said:
Somebody owes somebody an ass whoopin

Smokyballs said:
Jay, this is the exact reason I now have a very cool paperweight!
Click to expand...

Well the truth is out. NO Davidoff Cuban.

I would have liked the experience a fine rare cigar like that, with out a drought. Being able to share such a fine cigar with a bunch of good brothers makes the stick that much more rare indeed.

While I feel some what taken by the prank, I know it was all in good funny. I made so many friends while in Vegas, I really don't know how to tell you all about it.

I will leave you with this because a picture is worth a thousand words.

This is the prankster at 7:00 am. Notice the Burnt knees. The funny part is I only slept 4 hours the hole time in Vegas. That left a free bed all weekend. 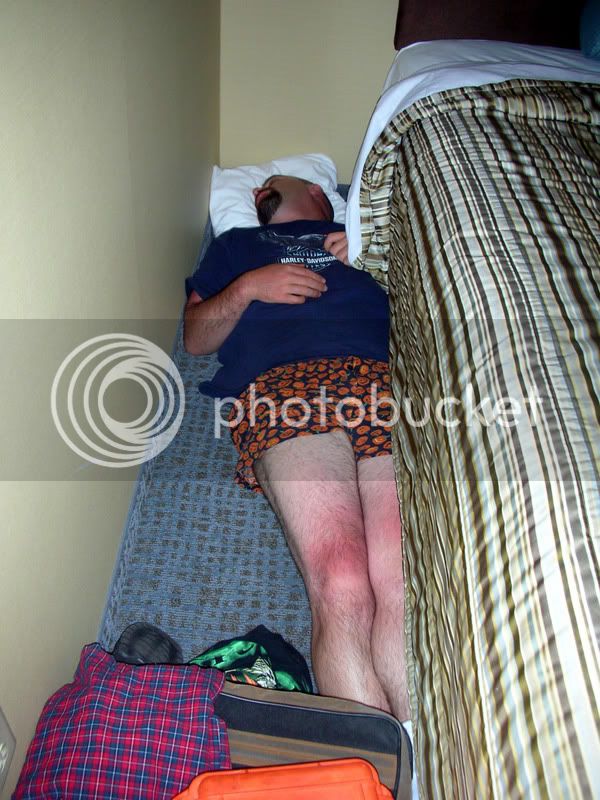 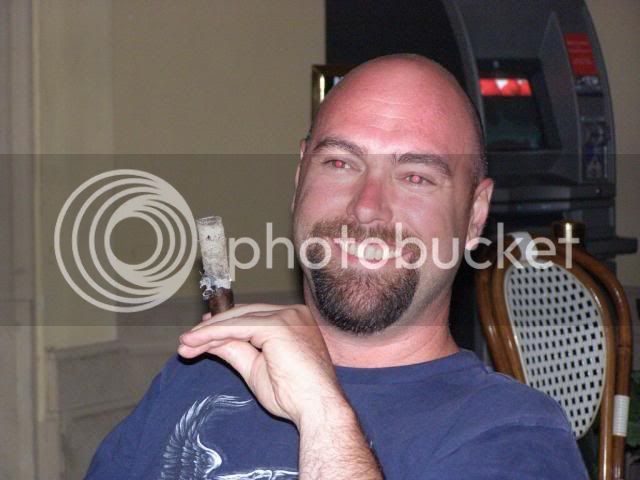 Edit to add photo from NullSmurff. Thanks Bro.
SmokeyBalls your cigars are on the way Brother.

No, you don't owe me shit! I wanted to tell you right away but I had to cover Cory! Please, if you feel the need to send out a package send it to OPFTH! By the way, that picture is priceless!
You must log in or register to reply here.
Share:
Facebook Twitter Reddit Pinterest Tumblr WhatsApp Email Link