Napa_Smokes said:
Well apparently I didn’t hit post reply and thankfully most of what I typed out was saved.

I didn’t measure the cigar but it looks like it’s about 6x50. Medium brown, smooth wrapper, very well constructed cigar with no soft spots. Aroma is of tobacco, cedar, sweet hay with floral undertones. Reminds me a lot of a Cuban but not quiet there which makes me think it’s either a Tat or Illusione.

Pre-light draw was very easy. No resistance at all. Reminds me of a pardon anniversario. Also reaffirms to me that it’s not Cuban or a Tat for that matter.

Halfway through the second third the wrapper began to split and unravel.

Overall a very nice cigar. I’m pretty sure I’ve never smoked it but it has some similarities to some that I’ve smoked in the past. I’ve ruled out it being Cuban, or a Tat. I feel like it is a Nicaraguan. Since I’m not to familiar with a lot of the new boutique brands I’m going to just take a wild guess and say it is an Illusione but I really have no idea.

So it is an Illusione and one I haven’t had or seen for that matter. I really had no idea what this cigar was though it was very nice. It’s a shame the wrapper started to split and I would have liked a little more resistance on the draw but it’s definitely a cigar I would smoke again.

Thanks for the chance to try it Brian.!!
Click to expand...

Great review, Josh! The Singulare Phantom 2010 is widely regarded as the best cigar Illusione's ever put out. The new regular production Phantoms are good... the OR 2010 is borderline ethereal.

Succubus said:
Of course he smokes it when I’m nowhere to be found
Click to expand...

If you're nowhere, it's a given you can't be found.

But even if you were somehow located, there are some things a man's gotta do on his own so back to the kitchen, woman!

vortex said:
If you're nowhere, it's a given you can't be found.

But even if you were somehow located, there are some things a man's gotta do on his own so back to the kitchen, woman!
Click to expand...

vortex said:
If you're nowhere, it's a given you can't be found.

But even if you were somehow located, there are some things a man's gotta do on his own so back to the kitchen, woman!
Click to expand...

Doesn’t that typically include your left hand and a playboy?

Succubus said:
Doesn’t that typically include your left hand and a playboy?
Click to expand...

So Josh is a left handed Playboy? Who knew!?

vortex said:
So Josh is a left handed Playboy? Who knew!?

Thank you all for your patience in me getting this posted:

The cigar Josh sent me is familiar looking, but upon closer inspection, it isn’t what I initially suspected: VR Famoso. It is sort of Robusto in size, sandy in color- about the hue of a cafe con leche. It stands up straight on the foot, construction is precise, and it feels heavy; dense. There are a few small, and some large, veins with a distinct wrapper seam. I take a V-Cut to the head and inspect.

I order a split of Mumm champagne to pair with the first half of the cigar. The dry draw and smell bring up notes of honey and hay - like something aged, similar to older Cohibas I’ve had. As I fire up the stick, I take my time, as the foot is quite dense. In the start, it is very subdued- some basic cedar and tobacco notes with hay and citrus coming through. It is giving me an interesting mouthfeel, some astringency and tannins like that of black tea. It is enjoyable, but lacking the complexity I desire- draw is a bit tight.

The next stage of the cigar came just before the second 3rd. The ash is salt and pepper, sort of like Idaho checkered granite. I’m smoking slow and the cigar is rewarding me for it. The draw is opening up, and so are the flavors. Grassy and peanut flavors start to emerge. It is smooth, but picking up in strength and providing that malted creaminess that I love. The peanut flavor is developing into hazelnut, but not too rich. I must say, this cigar has changed drastically since the start and I am extremely impressed.

As my sparkling runs out, I order a hopped Tin City cider. The final 3rd of this fine stick is bittersweet as it really starts to take me on a journey, but I know we only have a bit of time left together. A sweetness comes over my palate, from honey to caramel, with malted cream in the background. A couple of puffs in there reminded me of mexican chocomilk. The smoke really starts to build and the flavor and draw are perfection. Weirdly, in the finish, I get some popcorn notes as I take this down to a nub. Top 10 I’ve ever had, hands down.

I really have no clue what this could be- something I have never had. My best guest is that it is an aged Cuban in the perfect stage of it’s life - not too old, not too young, say 5 years old. As far as brand, it reminded me of Cohiba at first, but there is a lot more complexity in this cigar than Cohiba offers. Maybe an MdO?

Wow, I am not surprised - 10+ year old Punch Regional (Italy? Minutos?) Glad to finally have a Regional that really seems to stand up to the double band glory. Thank you Josh, it was truly a pleasure!!!

Great review!! And that’s definitely Josh’s handwriting...can you see why I have difficulty reading cards from him? Lol...

Succubus said:
Great review!! And that’s definitely Josh’s handwriting...can you see why I have difficulty reading cards from him? Lol...
Click to expand...

Either that or “fork” lol

Finally got to smoke this near perfect looking cigar from Ian!! And I am finally getting around to posting the review! Here goes nothing....

This is a Nice looking corona gorda with a warm sweet smell, pre light, and cold draw. The smell is something I have fell in love with lately, I feel like I might know this stick from just the smell...or maybe the brand at least

The very First few draws made me really happy. This thing gives the perfect amount of smoke with each draw. It’s thick with a leather taste to the pallet and a sweetish aroma upon exhale. Before the first third is even over with I get some strong white pepper. Not that it is not enjoyable but it snuck up on me. For sure smoking what I believe to be a CC. And at this point I will guess a boli, but I still have a ways to go.

The spice as backed off at the half way point and it’s more of a creamy leather than a in your face tone like before. Still really enjoying this. On the lower end of medium. Prefect mix of grey white ash so far. I love the aroma this gives off. Wish I could be smoking this inside some how. Still thinking CC but stuck between a boli and a RA.

As I finish it off, the burn and construction stay on point. This never got harsh and it was always full of tasty goodness!! I know I have had this and I know this brand is one of my fav CCs....but my final guess is a RA stick as I don't know of a Boli in this size.

And the winner is; Ramon Allones LCDH! I knew it, I was so close. I could tell just from the smell pre-light. Great smoke and great brand! Thank you sir!!!!!

First Touch - Medium sized veins and a very fine tooth to the wrapper give it a rougher feel. I wouldnt call her the ugly friend but she's a 6 out of 10. A few libations and you'd take her home.

Prelight - I cut the cap and take a few dry draws in an attempt to gain a hint. I taste a familiar sweet leathery flavor which is leading me to believe it is CC. First thoughts are Montecristo but I've never seen a 5x50 Monte...

First Third - As we start puffing away on this bad boy baking spices like nutmeg are in the forefront as well as a bit of unsweetened cooking chocolate in the back. The burn is becoming a little jacked up as it starts to rain and the humidity picks up but it's no worry as it soon corrects itself. 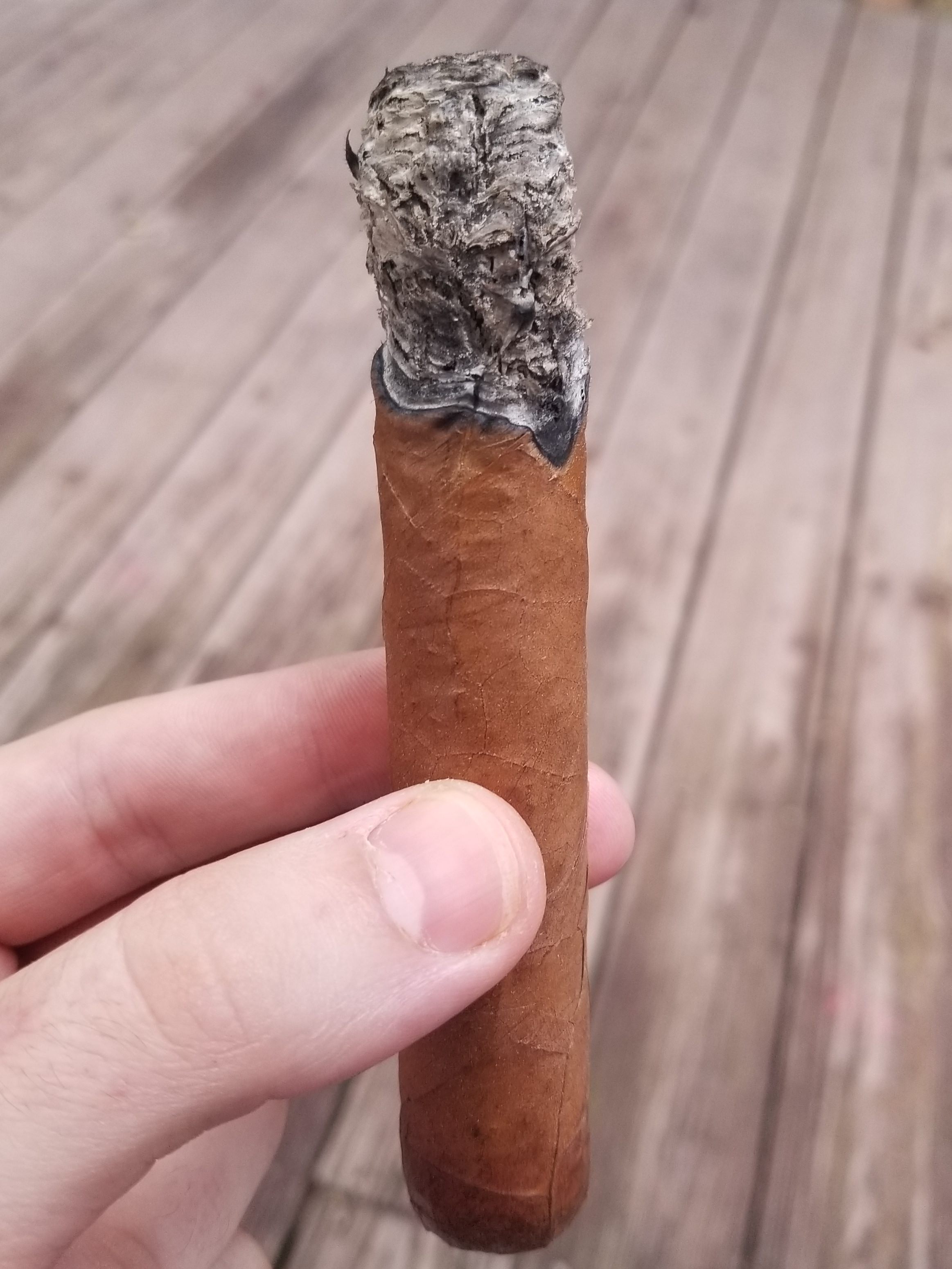 Second Third - A sweeter profile emerges as we move towards the halfway point. Coffee with cream and sugar in a leather cup is how I'd describe it. Odd, I know. The ash finally breaks off after about 1.5" and it's worth noting that the draw has been flawless since the light. She's providing as much smoke as I care to pull - very enjoyable. 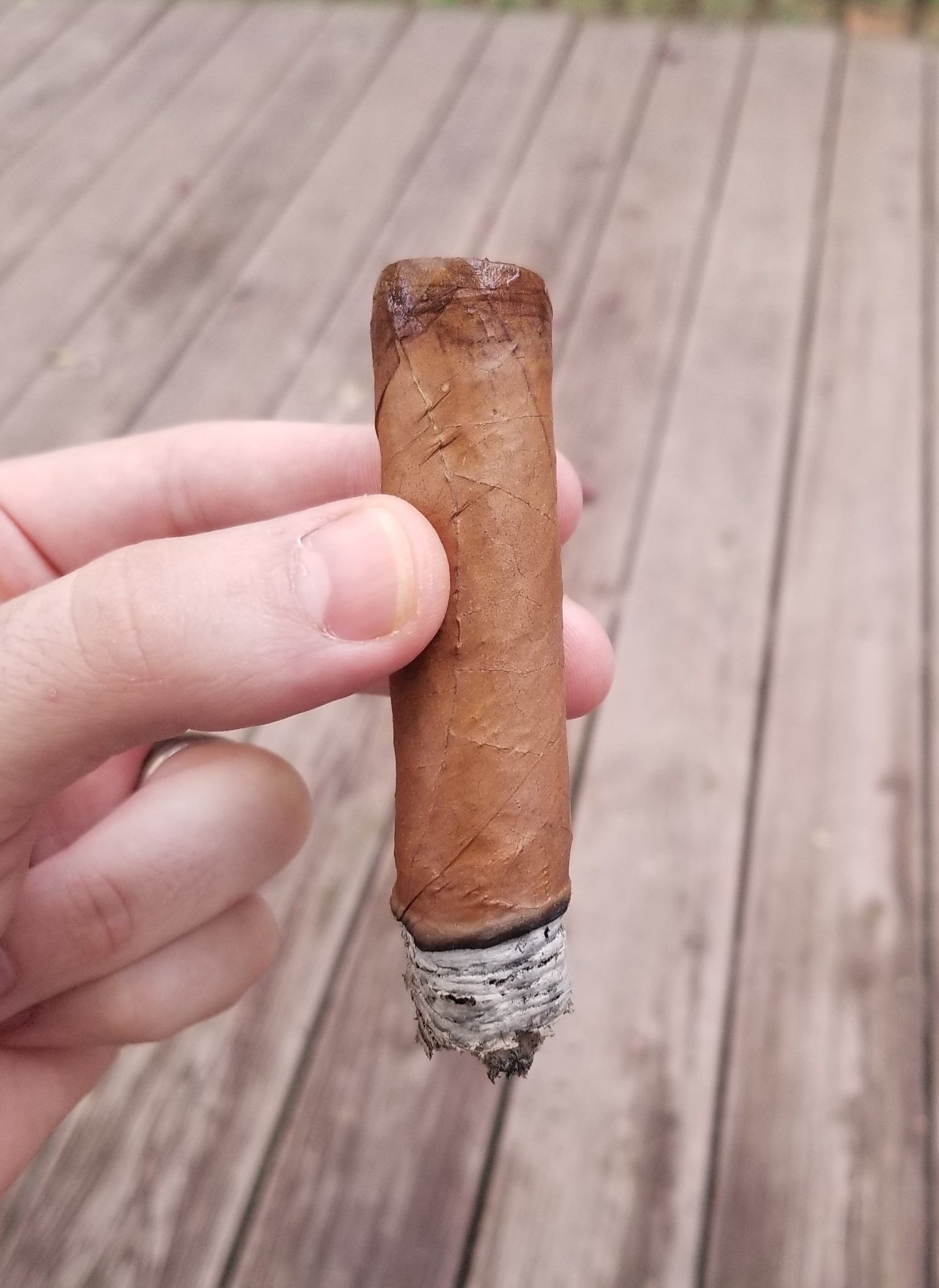 Final Third - The nutmeg is back and now the cooking chocolate I was tasting has turned to more of a milk chocolate. The burn has really tightened up and not a single young or bitter note can be found. This leads me to believe it may have at least a few years on it. One final 2" ash breaks off and I take a few last puffs before I set her down. 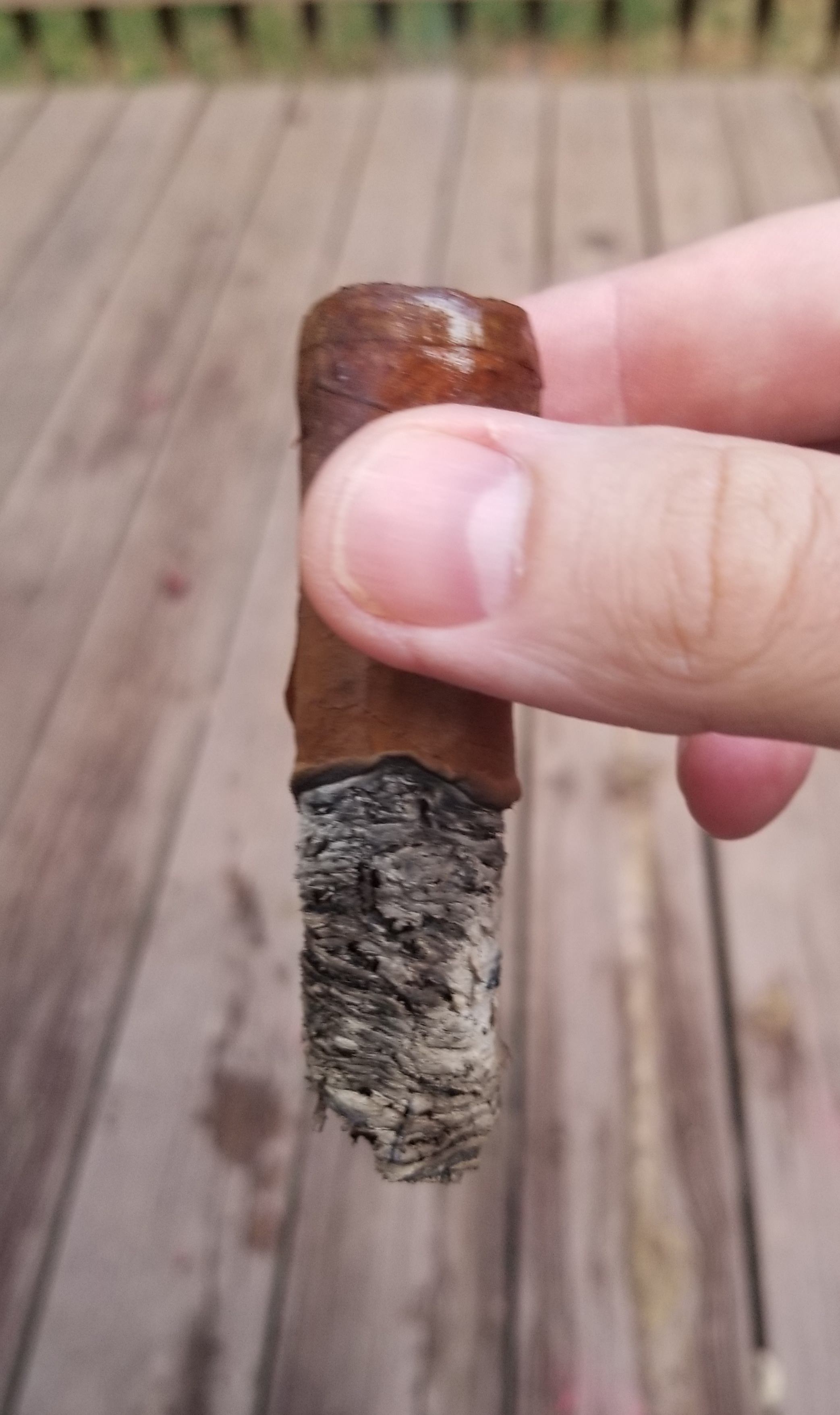 Overall great smoke with great construction and sweeter flavors. Two long ashes and a nub sit in the tray and I stare at them like they may give me one last hint... They don't. 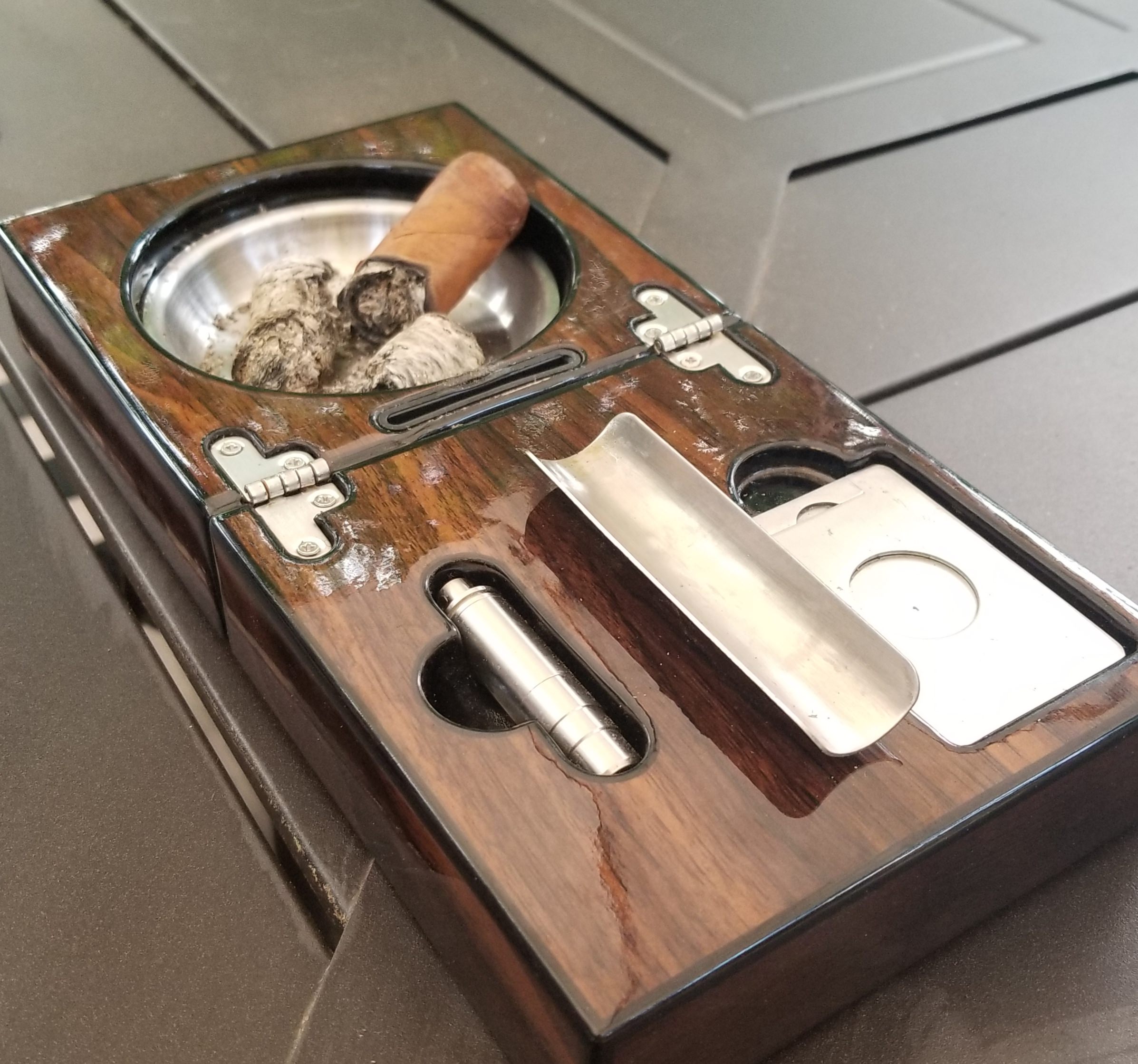 And the moment you've all been waiting for...(my extremely uneducated guess) *Drumroll Please*
HDM EPICURE No.2 !? 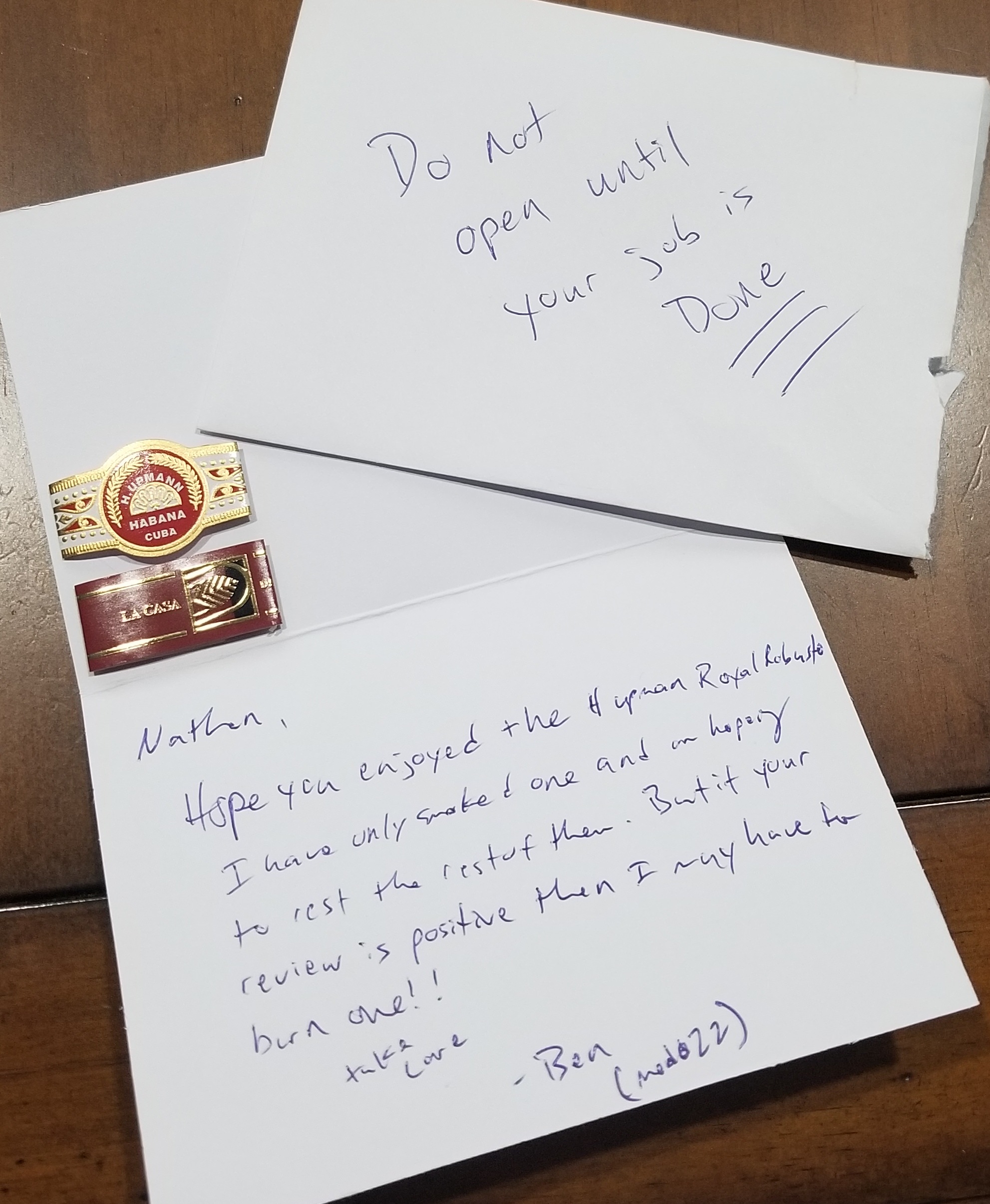 I love reading these BCRs. Man, you all have some ridiculous experience, and I am in awe every time. Great reviews and photos, all.

kann said:
I love reading these BCRs. Man, you all have some ridiculous experience, and I am in awe every time. Great reviews and photos, all.
Click to expand...

You should pick up Acclaym's pass!

Corneighdo said:
You should pick up Acclaym's pass!
Click to expand...

I'll certainly look into it. Thanks.

Awesome review. I’m glad you enjoyed it my friend!!